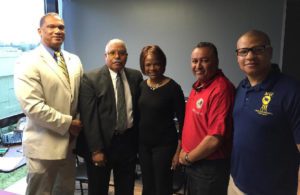 Chief Val Demings announced another major endorsement in her bid for U.S. Congress. The American Federation of Government Employees threw their support behind Chief Demings in the contested congressional race, where Demings is running against State Senator Geraldine Thompson, Bob Poe and Fatima Fahmy in the Democratic primary.

“Chief Demings’ proven record of leadership at the highest level in law enforcement makes us confident in her abilities to fight for the rights of federal workers by advocating for safer work environments and fighting to prevent job loss in government facilities,” said locally-headquartered National Representative Johnnie Walker. “We are proud to stand with Val Demings and know that she will stand with us when elected to Congress.”

Chief Demings embraced the endorsement and reflected on her law enforcement service.

“It means so much to me to be endorsed by AFGE, which represents thousands of hardworking federal employees across Central Florida,” Chief Demings said. “Having 27 years of law enforcement experience, including serving as the airport police division commander during the attacks of 9/11, I know firsthand the contributions that federal workers make to our national security and our economy. I am grateful for their support and look forward to representing AFGE members as a Member of Congress.”