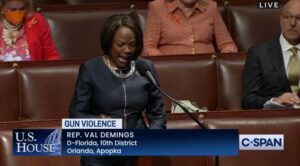 In a passionate speech on the House floor, Val Demings called on Congress “to do more” and take action on gun violence. Rep. Demings voted for a “Red Flag” gun safety bill in the House of Representatives, and as she also focuses on her Senate run against Republican Marco Rubio, the issue of gun safety is likely to take center stage. Demings helped to introduce the Federal Extreme Risk Protection Order Act, which passed the House.

Rep. Demings spoke on the House Floor in support of action on gun violence:

“As a police chief, I was expected to get things done,” Rep. Demings said on the floor. “Offering thoughts and prayers are fine, my grandchildren do that. But if that was all I did as a police chief after mass shootings, no one would have let me get away with that. Well, there is an expectation for Congress too. To do more.”


“What is painfully wrong with this tragic moment in our history are the people who want the power of the position, but not really the responsibility,” Rep. Demings continued. “Congress failed that little girl who could only be identified by her green tennis shoes. Congress failed the loved ones in Buffalo, at Pulse nightclub, and Newtown.”

“Will we do something? Haven’t we had enough? Or is it just too scary to do the right thing?” Rep. Demings concluded.

Rep. Demings is a Vice-Chair of the Congressional Gun Violence Prevention Task Force.

A federal extreme risk protection order is a federal court order that prohibits a person from purchasing, possessing, or receiving a firearm or ammunition. Florida passed a Red Flag law following the Parkland shooting and Florida judges have acted more than 8,000 times to keep guns out of the hands of people authorities deemed a risk to themselves or others.