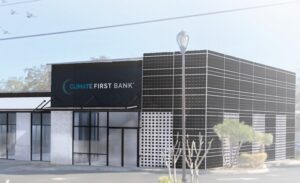 Climate First Bank, a full-service FDIC-insured commercial bank focused on environmental sustainability, celebrates one year of operation this month. In just one year, the bank opened two branches and shattered its financial and ESG goals to achieve $211 million in assets, $142 million loans and $171 million deposits.

In its second year, Climate First Bank will build upon this phenomenal financial performance with the opening of a temporary Lake County branch at 2755 E. Orange Avenue in Eustis, Florida (pending regulatory approval).


Climate First Bank was first envisaged by banking veteran and environmentalist Ken LaRoe in 2020. Despite the economic turmoil caused by the COVID-19 pandemic, Climate First Bank raised an unprecedented $44 million in capital on a minimum subscription of $17 million. In June 2021, Climate First Bank’s flagship location in St. Petersburg opened to much enthusiasm. Months later, the bank expanded into Central Florida with the opening of its Winter Park branch. Climate First Bank grew its devoted team to 43 employees and appointed three new board members.

Committed to doing the right thing for their people, their planet, their community and their shareholders, the bank joined several mission-aligned networks like the Net-Zero Banking Alliance and 1% For The Planet, created various charitable banking products like Pride Banking and Regeneration Checking and launched its revolutionary Digital Solar Lending Platform.

“I’m very thankful to our shareholders and directors for their faith in me and my team. Together, we have launched far more than a bank, we’ve launched our vision of a climate-positive future,” said CEO and Founder of Climate First Bank Ken LaRoe. “The support we’ve received from the community highlights how much meaningful climate action resonates with people.”

Climate First Bank will continue its statewide expansion and build upon its current book of business. Within the next year of business, the Winter Park branch’s comprehensive LEED retrofit will complete, the St. Petersburg headquarters will relocate to a larger location at 182 37th Ave. North once LEED Platinum renovations are complete and construction of a location in Mount Dora will begin in earnest.

The bank also recently announced the launch of fintech startup OneEthos which will provide banking as a service (BaaS) solutions, initially to Climate First Bank and eventually to other financial services firms. Climate First Bank will elaborate further on their progress as an ESG-focused institution with the publication of their first Annual Impact Report in July.