In what is likely to be one of his last ceremonial bill signings, Gov. Charlie Crist highlighted on Wednesday legislation that will create a Civil Rights Hall of Fame exhibit in the Capitol, flanked by a host of mostly Democratic lawmakers who pushed for the measure last year. 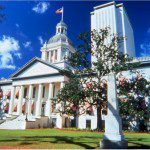 The measure (HB 523), sponsored by Sen. Tony Hill, D-Jacksonville, calls for the members of the Hall of Fame to be nominated by the Florida Commission on Human Relations and selected by the governor.

“It’s only appropriate…to commemorate what so many have done, not only in the past, but continue to do today and will do in the future,” Crist said just before he re-enacted his earlier signing of the bill.

The legislation was sponsored in the House by Rep. Alan Williams, D-Tallahassee, who said he wished there was such a museum when he visited the Capitol when he was growing up in Tallahassee.

“I know living in this community, visiting this capitol when I was a little boy…we didn’t mention of those who fought to get all of us here,” he said.

When visitors come to the capitol after the Civil Rights Hall of Fame is built, however, “they will know…what people did what things for them to be able to work through those door, ” Williams said.

Hill added that there were not many other states that had moved to honor the civil rights movement on their official grounds.

“We’ve traveled all over the breadth and length of this country, and I think this will be a first for a state capitol,” he said.

More than 3.4M Homeowners – 6.4% of All Mortgages – Now in COVID-19-Related Forbearance Plans

Florida Is 2nd Most Vulnerable State to Identity Theft and Fraud