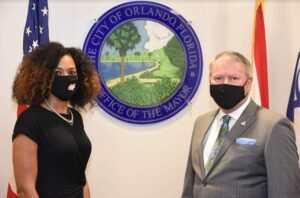 The City of Orlando welcomed Merchon Green to City Hall as the local government’s first Equity Official. Merchon will help lead the efforts to embed equity and inclusion “into everything” the City of Orlando does as a municipal government, according to officials. The goal of the new position is to supportbwork to ensure that Orlando is a place where every resident feels equally valued, equally protected and has equitable access to opportunity.

That has not been the case under Mayor Buddy Dyer’s administration over the last decade. After years of criticism and in response to the latest community concerns, Dyer is finally taking a step to make changes at City Hall.


Merchon relocated from Vero Beach, where she worked in a number of roles to combat systemic racism and inequality. She served as chairperson of the Indian River County Schools Equity Committee, director at the Dodgertown Community Partnership School, helping remove barriers to learning for students and families, and launched a non-profit organization dedicated to improving the lives of residents in disadvantaged communities.

In her new role, Merchon will help the City of Orlando advance equity and inclusion initiatives, starting by focusing on local policies and practices as a city government. Merchon has experience advising on policy, is passionate about the work to combat systemic racism and inequities and city officials hope with her leadership, they will finally be able to move the needle on building a more equitable city for all.