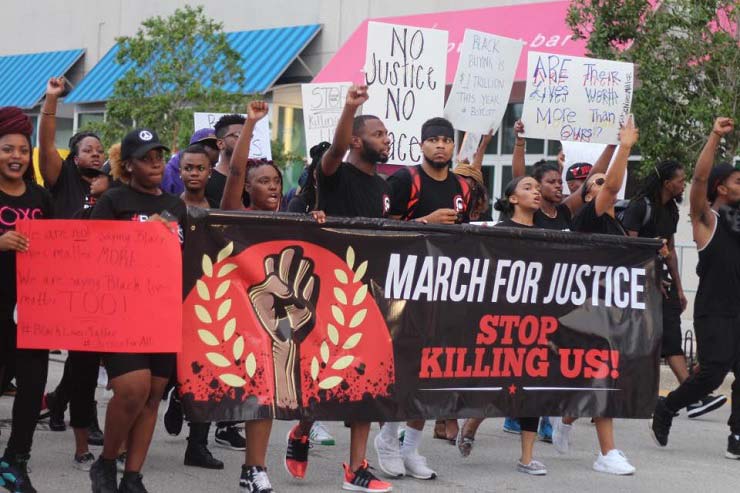 Last night, thousands marched under the banner of Black Lives Matter through downtown to protest the police killings of black Americans and ongoing injustice in the African-American community. The peaceful blackout march shut down Orlando, showing the community and local leaders there is new momentum to see real change. “The time to come together is now,” Ashanta Davis, one of the Orlando rally’s organizers, posted on the event’s Facebook page. “There is never any justice when it comes to being a black male and female in America. There has been way too many unjustly acts against innocent people of color, and time and time again it’s the same end result.”

“It’s time to be brave, show them we aren’t scared,” Davis added.

The thousands who took the Orlando streets were not only brave, they were inspirational. Organizers said they planned the event to protest the recent deaths of Alton Sterling and Philando Castile, who were both shot and killed by police.

“I am so proud of each and every single one of them,” National Action Network Central Florida Chapter President Lawanna Gelzer said about the thousands who were marching. Gelzer also happened to be celebrating her birthday yesterday. “It was inspiring and motivating to see this many young people standing up for justice and demanding change. This is the absolute best birthday present I could have been given, and I told them that.”

The protest started at Lake Eola and protesters had signs, held fists in the air and chanted “Hands up, don’t shoot,” and “No justice, no peace.” After hearing from speakers at Lake Eola, the blackout march made its way through downtown while making stops at the Orange County Courthouse, the Orlando Police Department headquarters and the Dr. Phillips Center for the Performing Arts before circling back to Lake Eola. The protest shut down Colonial Drive and Orange Avenue downtown along the way.

By all accounts, the Orlando blackout march was a success. There were no arrests and no civil rights violations during the entire protest. According to some reports, as many as 2,000 plus people, mostly young, turned out downtown to support the Black Lives Matter march.

There were many volunteer legal observers for the rally and march, including Lawanna Gelzer, Camara Williams, Shannon Ligon, James Smith, Alexandria Gordon and Temika Hampton. The legal observers document any civil rights violations and serve as eye-witnesses, if needed, at a trial.

“It was so rewarding to see young minority engagement,” Camara Williams posted on Facebook. “We just have to continue the momentum!”

The Orlando Blackout march included a strong sense of unity and encouragement. It included participation from many who have never protested or marched before, but showed a new generation of activists ready to stand up for what is right in Orlando. Organizers of the event should be very proud of their efforts and the local momentum they have generated for social justice. Of course, locally in Orlando, there have been many cases of police brutality and excessive force recently which have raised major concerns from the community. The Black Lives Matter march could increase local pressure already on politicians like Mayor Buddy Dyer and OPD Chief John Mina.

There was also a strong urgency for all those participating to vote in upcoming elections, as well as to encourage others in their community to vote. There is a clear desire to see the protest turn into political action which will lead to results for the community.

“They all did a great job,” Gelzer added. “I am thrilled about the bonding of various generations and all the emerging activists, who are coming together in unity. Think of how much we can accomplish together.”

As for the event’s organizers, they are already busy working on the next steps.

“I promise this is not the end, but the start of a new change,” Davis posted on the Facebook page. “More is soon to come.”

Davis also announced a community forum this Saturday, July 16th, at Barnett Park from 6-8pm. The group plans to discuss ways to build up black-owned businesses, ways to get laws passed with local commissioners, ways to create community patrols to help with police abuse and local black-on-black crime in addition to other issues, according to Davis.