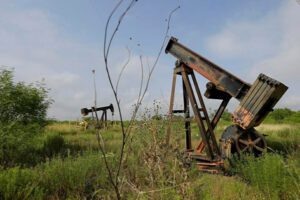 The Department of the Interior announced $1.15 billion in funding is available to states from the Bipartisan Infrastructure Law to create jobs cleaning up orphaned oil and gas wells across the country. Millions of Americans across the country live within a mile of an orphaned oil and gas well. The funding passed Congress with support from both Democrats and Republicans and will help cap leaking wells in Gulf Coast states of Alabama, Louisiana, Mississippi, and Texas. Past leaks, such as Deepwater Horizon off the coast of Louisiana, caused over a decade of environmental harm and cleanup in Florida.

Orlando Representative Val Demings, who is running for U.S. Senate against Sen. Marco Rubio, touted that she supported the legislation which will create new jobs plugging orphaned oil and gas wells and stopping air and water pollution. “I am proud to announce this new investment that will clean up Florida’s water and air,” Rep. Demings said. “As we know, the Gulf Stream carries oil and gas pollution from all across the Gulf Coast to us here in Florida. Throughout my time in Congress I have led efforts to stop offshore drilling by Florida’s coasts. By capping existing oil and gas wells that are currently spewing uncontrolled pollution, we will protect our health and safety, and ensure that Florida’s natural beauty and tourism economy is protected.”

Orphaned wells are polluting backyards, recreation areas, and public spaces across the country. The historic investments to clean up these hazardous sites will create good-paying, union jobs, catalyze economic growth and revitalization, and reduce dangerous methane leaks. This is a key initiative of President Biden’s Bipartisan Infrastructure Law, which allocated a total of $4.7 billion to create a new federal program to address orphan wells.

“President Biden’s Bipartisan Infrastructure Law is enabling us to confront the legacy pollution and long-standing environmental injustices that for too long have plagued underrepresented communities,” said Secretary Deb Haaland. “We must act with urgency to address the more than one hundred thousand documented orphaned wells across the country and leave no community behind. This is good for our climate, for the health of our communities, and for American workers.”

This will clearly be an issue in the upcoming Senate campaign, with Rep. Demings claiming credit for securing the funding for various projects like this in the bipartisan infrastructure law that Sen. Rubio did not support.

“I’m proud to have worked with both Democrats and Republicans to secure these new investments to keep Florida safe and clean and keep our economy growing,” Rep. Demings added. “I will continue working to ensure that Florida has everything we need to compete and win on the world stage. We look forward to additional funding throughout our community in the coming years.”