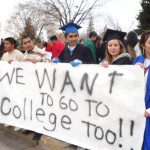 Senate Bill 318, which is being sponsored in the House by Rep. Dwight Bullard, D-Miami, will make higher education more accessible for undocumented students by making tuition rates more affordable.  Under current law, undocumented students are classified as “nonresidents” for tuition purposes because they have not been properly admitted into the United States.  The bill, however, would exempt undocumented students from paying non-resident tuition if they meet certain requirements.

“This bill simply extends to students to whom the State has already provided a basic primary education, the opportunity to attain an affordable post-secondary education,” Sen. Siplin stated.

Under the bill, an undocumented student would have to meet the following requirements to be exempted from paying non-resident tuition at a State university or Florida College System institution:

(3)    Register or be currently enrolled in an institution within the Florida College System or the State University System; and

(4)    Submit an affidavit with the college or university stating his/her intent to file for legal residency as soon as he/she is eligible to do so.

“It’s only fair that we treat students the same way in the postsecondary education arena as we treat them in K-12.  We’re not looking for a free-ride; we’re simply trying to make college less expensive for these students,” said Siplin.

The bill, which has four committee stops, will be heard next in the Senate Higher Education Committee.