Big Tech’s Absolute Power: A Threat to Freedom of Speech and Competitiveness 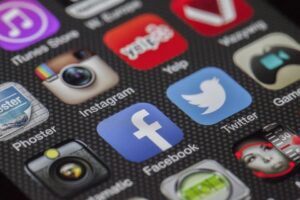 Social media companies have been under intense scrutiny over the past few years for their influence and seemingly unchecked power on the global social and political process. These tech giants have solidified their influence on the world population over the years, as billions of people now rely on them for various crucial purposes, including meeting their daily basic needs, accessing and disseminating information, and exercising their human rights. It is nearly impossible to avoid the services of at least one of these leading online firms, such as Amazon, Google, Facebook, and Twitter.


With 59% of the global population using the internet, it’s no doubt that big tech has a strong grip over our world. While their services make our live ever-more efficient, the over-concentration of power in these firms is worthy of concern. In the past few years, many groups and individuals have intensified calls on the world’s policymakers to monitor their activities, following numerous allegations of suppression of freedom of speech and meddlesomeness in politics.

De-platforming POTUS Without Checks Is Worrisome

The recent Capitol Hill riot that led to the de-platforming of the former US President Donald Trump has once again shown how powerful social media companies have become. For many, especially those who viewed Trump’s choice of language in most of his social media engagements as aggressive and divisive, the permanent ban could be seen as a welcome development and long overdue. However, the absolute power that allows the social media giants to single-handedly decide what should and shouldn’t be said on their platforms is a considerable threat to freedom of speech, which is a basic human right. The event has awakened many world leaders to the dangers that such action poses on online discourse.

“The fact that a CEO can pull the plug on POTUS’s loudspeaker without any checks and balances is perplexing,” says the European Union’s commissioner for the internal market, Thierry Brenton. Trump’s case is just one out of many because, for years, these tech giants exert total authority on who should and shouldn’t have a voice on their platforms.  Trump’s ban “is not only confirmation of the power of these platforms, but it also displays deep weaknesses in the way our society is organized in the digital space,” Brenton added.

As for the German Chancellor Angela Merkel, the big tech’s permanent ban against Trump is “problematic” because freedom of opinion is a fundamental right, her spokesperson Steffen Seibert said. Her statement suggested that Merkel is not only concerned about the implications of the big tech’s action but also worried about the manner in which the ban was carried out.  “This fundamental right can be intervened in, but according to the law and within the framework defined by legislators—not according to a decision by the management of social media platforms,” Seibert told reporters. The UN Secretary-General Antonio Guterres is also “particularly worried” about the power wielded by social media companies and called for “a regulatory framework with rules” to regulate decisions like Trump’s ban. His statement reechoed the need for the government’s inputs in addressing the powers these companies wield. For many reasons, Guterres and others in that school of thought have a legitimate concern.

Firstly, the unchecked control that allows the firms to censors people’s views and ban users from their platforms at will is worrisome. As a fallout from the Capitol riot, 70,000 Twitter accounts posting QAnon content were also suspended along with Trump’s handle. Of course, it may be argued that the content violated Twitter rules, and the banned users were forewarned. Because according to the company, “in order to maintain a safe environment for users on Twitter, we may suspend accounts that violate the Twitter Rules.” Spam, security risk, and abusive tweets and behavior are some of the listed common grounds for a ban.

However, this begs the question: how does the company take to determine is statement or behavior is abusive? Sometimes, it all boils down to a matter of perception – meaning a user could be wrongly accused, which Twitter itself admitted thus: “We move quickly to enforce our rules, but sometimes we don’t have the full context and can make mistakes.” Though suspended users can appeal the decision in court, in most cases, lawsuits against these tech giants have failed as courts don’t have the legal frameworks to rule against them. The argument is that social media companies are private entities with the power to determine how to regulate their platforms. As a result, they can legally suspend people for nearly any reason – arbitrary and inscrutable, and appealing the decision could mean an effort in futility. In the United States, most of these appeals were filed by right-wing figures, accusing the big techs of suppressing conservative content on their platforms and having a political bias. Also, in India, Twitter was accused of anti-conservative political bias in 2019.

Users’ Lack of Control Over Their Personal Data

Secondly, it is worrisome the volume of information gathered about each of their users and the lack of control users have about their data, especially with the allegations of data-sharing and ‘data sales deals by these companies. For instance, Facebook has been caught on the back foot several times over a breach of privacy. In 2018, a newspaper report revealed how the network shared users’ data with other tech companies like Apple, Microsoft, Amazon, Netflix, and Spotify. The company was accused of having a special arrangement with over 150 firms to share its users’ personal data, including its fellow tech companies, media organizations, online retailers, and automobile manufacturers. The same network was also investigated for its role in one of the biggest ever data breaches in which 50 million US voters’ profiles were harvested for Cambridge Analytica.

Another source of concern is the big tech’s double standard in enforcing their rules. While they are so quick to suspend certain individuals for “violating” their rules, they seem to have a sacred cow treatment for some others with even worse conducts. The same social networks that permanently banned Trump for “inciting violence” still allow certain politicians and their supporters to use their platforms to incite violence, intimidate oppositions, and spread misinformation. A good example is Iran’s Supreme Leader Ali Khamenei, whose many violent tweets include hate speech, openly inciting killings and riots, and antisemitism. Although Twitter later banned an account linked to the Supreme Leader’s office, only after activists called out the social company to apply equal policies to all.

In Pakistan, the draconian media enforcement and blasphemy laws allow the authorities to censor people’s social media content deemed anti-government and anti-Islam. This has led to the arrests, imprisonment, and death sentence of many. Despite the highhandedness, the social media giants haven’t done much to end the hostile treatments even as their platforms are being used to identify and target dissidents. More worrisome is the fact that the same platforms are being used by extremist groups to issue death threats against alleged blasphemers and organize violent protests. One of these far-right groups is Tehreek-e-Labbaik Pakistan (TLP), whose members are known for inciting violence online.

Way Forward: Taking a Cue from the EU

In order to checkmate the influence of these tech giants, especially to protect free speech, some governments have taken a bold step in regulating their activities. The EU is leading this initiative already by launching investigations into their conducts. There are also various pieces of legislation in place to impose heavy sanctions when necessary.

In 2018, the region implemented the General Data Protection Regulation to regulate the collection and use of personal information both by private sectors and governments. The law has given social media users a stronger say on their personal data. Among other things, it mandates internet companies to disclose to people what data they collect from them and how they will use and share it. It also allows people to ask companies to erase their personal data in certain circumstances.

The EU is also working on more ambitious plans that will ensure a safer and better digital space for all. It recently announced new rules that would protect all digital space users’ fundamental rights and establish a level playing field for innovation, growth, and competitiveness. The new rules could see companies like Google and Apple face hefty fines if they fail to adhere.

One of the rules, the Digital Markets Act, aims to curb self-preferencing, allowing the leading companies to have undue dominance of the digital space. The privilege enjoyed by big techs like Apple and Google has raised competition law concerns over the years, as it undermines their competitors’ growth. The idea is to allow smaller brands to compete favorably. The EU also wants these tech giants to allow users uninstall apps that come with their devices.

In the United States, social media companies enjoy some immunity from Section 230 of the Communications Decency Act of 1996, which explains why most lawsuits against them fail. However, a recent survey shows that most Americans believe that these companies wield too much power and influence, especially in the country’s political space. Although, there has been a yearlong investigation into the competition in the tech industry by the House Judiciary Antitrust Subcommittee. The Federal Trade Commission is also investigating how some social media companies use users’ personal data. However, most Americans want the government to do more and are calling for more regulation of tech giants. The EU is also hoping that the United States would join forces with it to start a constructive dialogue that will foster globally coherent principles in digital space.

Olusegun Akinfenwa is a political correspondent for ImmiNews, a UK-based organization that covers political and social events from around the world.