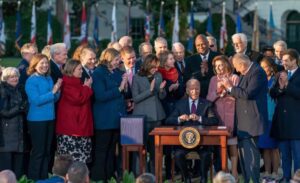 What can the state of Florida expect from the massive $1.2 trillion bipartisan infrastructure bill that President Joe Biden recently signed? There was a lot in the bill Congress finally passed, and Florida will get billions of dollars for infrastructure investments. While the legislation had Republican support in the Senate and House Speaker Nancy Pelosi needed Republicans in the House to pass the bill, the infrastructure bill did not receive support from any Republican member of Congress from Florida.

In Florida, the American Society of Civil Engineers gave Florida a C grade on its infrastructure report card, so the funding is both welcome and necessary. Overall, this legislation includes around $550 billion in new federal investment in America’s roads and bridges, water infrastructure, resilience, internet, and more.

Here’s a breakdown of what Florida can expect from the bipartisan Infrastructure Investment and Jobs Act:


Democrats say they delivered big for voters. Overall, Congress approved spending: $110 billion for roads, bridges and other infrastructure fix-ups. Of that, $40 billion is new funding for bridge repair, replacement and rehab. Another $73 billion for electric grid and power structures. A total of $186 billion for rail, broadband, and water infrastructure. $21 billion for environmental remediation, most of which will go to urban neighborhoods where the majority of citizens are of color. There is $47 billion for flooding and coastal resiliency, as well as “climate resiliency,” including protections against fires. And the $39 billion to modernize transit will be the largest federal investment in public transit in history, according to the White House.

Central Florida projects that will likely receive funding from the legislation will come from proposals made by U.S. Representatives Val Demings, Darren Soto and Stephanie Murphy. Congresswoman Demings is also running against Senator Marco Rubio and the infrastructure investments are sure to be a focus of the campaign. Senator Rubio joined Senator Rick Scott in opposing the bipartisan bill. Rubio claimed he is “for infrastructure” but voted against the infrastructure investments to stop the “Build Back ‘socialist’ bill,” even though they are separate pieces of legislation.

“When we invest in middle class America, when we invest in people who have to go to work every day, America does better,” said Rep. Demings. “Our communities need this funding now. Democratic and Republican mayors who are clear-eyed know that investing in our supply chain infrastructure can’t wait, jobs can’t wait, repairs can’t wait, fighting climate change can’t wait, and protecting our health and safety can’t wait.”

“Very sad that the RINOs in the House and Senate gave Biden and Democrats a victory on the ‘Non-Infrastructure’ Bill, where only 11% of the money being wasted goes to real infrastructure,” former President Donald Trump said. “How about all of those Republican Senators that voted thinking that helping the Democrats is such a wonderful thing to do, so politically correct. They just don’t get it!”

“Our plans will create millions of jobs in new and future industries, restore our global competitiveness, rebuild Florida’s crumbing roads and bridges, expand broadband and reduce the cost of internet across our state, keep our children safe from unclean water, protect our air and climate, and support U.S. manufacturing,” Rep Demings added.