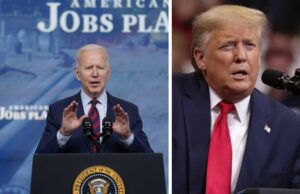 President Joe Biden is standing firm on his proposed American Jobs Plan, which the White House calls an investment in America that will create millions of good jobs, rebuild our country’s infrastructure, and position the United States to out-compete China. Former President Donald Trump is calling it a “massive giveaway to China”  and says it will “crush American workers” while branding it a huge tax increase. As you can see, Biden’s bold and expensive plan would redefine the American economy, and the reaction to the proposed plan is very mixed.


“The idea of infrastructure has always evolved to meet the aspirations of the American people and their needs, and it’s evolving again today,” President Biden said. “We need to start seeing infrastructures through its effect on the lives of working people in America. What is the foundation today that they need to carve out their place in the middle class to make it — to live, to go to work, to raise their families with dignity, to ensure that good jobs will be there for their kids, no matter who they are or what ZIP Code they live in?”

President Biden summarizes the bill as modernizing 20,000 miles of highways and roads, repairing 10,000 bridges in need of upgrade, building new rail corridors and transit lines, reducing bottlenecks at our ports and airports, and of course a large part of the plan is focused on tackling the climate crisis. It would also raise corporate taxes to 28% in a big reversal from the Trump administration, but President Biden is adamant that the Jobs Plan receives adequate funding.

“Joe Biden’s radical plan to implement the largest tax hike in American history is a massive giveaway to China, and many other countries, that will send thousands of factories, millions of jobs, and trillions of dollars to these competitive Nations,” former President Trump said. “The Biden plan will crush American workers and decimate U.S. manufacturing, while giving special tax privileges to outsourcers, foreign and giant multinational corporations.

The White House claims the legislation takes key steps toward a fairer tax code that encourages investment in the United States, stops shifting of jobs and profits abroad, and makes sure that corporations pay their fair share. Trump thinks differently.

“Under the Biden Administration, America is once again losing the economic war with China—and Biden’s ludicrous multi-trillion dollar tax hike is a strategy for total economic surrender,” former President Trump said. “Sacrificing good paying American jobs is the last thing our citizens need as our country recovers from the effects of the Global Pandemic. Biden’s policy would break the back of the American Worker with among the highest business tax rates in the developed world.”

President Biden did state he was willing to negotiate on the tax rate while taking questions after his remarks. “I’ve come forward with the best, most rational way — in my view, the fairest way, to pay for it. But there are many other ways as well, and I’m open,” President Biden said.

Companies that send American jobs to China should not be rewarded by Joe Biden’s Tax Bill, they should be punished so that they keep those jobs right here in America, where they belong.

This legislation would be among the largest self-inflicted economic wounds in history. If this monstrosity is allowed to pass, the result will be more Americans out of work, more families shattered, more factories abandoned, more industries wrecked, and more Main Streets boarded up and closed down—just like it was before I took over the presidency 4 years ago. I then set record low unemployment, with 160 million people working.

This tax hike is a classic globalist betrayal by Joe Biden and his friends: the lobbyists will win, the special interests will win, China will win, the Washington politicians and government bureaucrats will win—but hardworking American families will lose.

Joe Biden’s cruel and heartless attack on the American Dream must never be allowed to become Federal law.  Just like our southern border went from best to worst, and is now in shambles, our economy will be destroyed!