This is the Great Zax Bypass

“Then the North-Going Zax puffed his chest up with pride. ‘I never,’ he said, ‘take a step to one side.’”

The quote from the 1953 publication of The Sneetches and Other Stories by Dr. Seuss painfully represents where we are as a society in modern America. Perhaps the author, Theodor Seuss Geisel, was ahead of his time; or perhaps, history has a way of repeating itself.

The 50’s was a time that had dominant undertones throughout culture detailing the battle of communism throughout the US and its allies. You can see this depicted in a variety of advertisements of the time, Disney animations as well as the beloved Dr. Seuss books. In the Zax short story, it is eerily similar to not only the Cold War going on at the time, but also to the culture war that seems to be afoot right now. The battle between ‘the offended’ and ‘the offender’ has grown more apparent through every headline sprawled across Facebook and Twitter, igniting opinions and division. And so the story goes, as it has every other time before, it the battle between factions seems to only destroy, and cease true progress. So what does this cancellation mean for the Orlando area?

“Today, on Dr. Seuss’s Birthday, Dr. Seuss Enterprises celebrates reading and also our mission of supporting all children and families with messages of hope, inspiration, inclusion, and friendship.

“We are committed to action.  To that end, Dr. Seuss Enterprises, working with a panel of experts, including educators, reviewed our catalog of titles and made the decision last year to cease publication and licensing of the following titles:  And to Think That I Saw It on Mulberry Street, If I Ran the Zoo, McElligot’s Pool, On Beyond Zebra!, Scrambled Eggs Super!, and The Cat’s Quizzer.  These books portray people in ways that are hurtful and wrong.

“Ceasing sales of these books is only part of our commitment and our broader plan to ensure Dr. Seuss Enterprises’s catalog represents and supports all communities and families.”

This will have a huge impact on culture, namely in teaching tools for children learning to read as well as teaching philosophy, morals and values. “Read Across America Day” which is held annually on Dr. Seuss’ birthday, launched in 1998, deliberately to celebrate the legacy of the man who helped shape millions over several generations. In my own personal opinion, the late legacy that was Dr. Seuss, did not get enough credit, especially during his living years. The books that are being pulled off of the shelves were children’s books published between 1937 and 1976, and yet these books should be even more highly praised today – Not cancelled.

According to the Washington Times:

The author’s works faced criticism after a study from the Conscious Kid’s Library and the University of California, San Diego, in 2019 found a lack of diversity in his children’s books.

“Only two of the forty-five characters are identified in the text as “African” and both align with the theme of anti-Blackness,” the study said. “White supremacy is seen through the centering of Whiteness and White characters, who comprise 98% (2,195 characters) of all characters. Notably, every character of color is male. Males of color are only presented in subservient, exotified, or dehumanized roles. This also remains true in their relation to White characters. Most startling is the complete invisibility and absence of women and girls of color across Seuss’ entire children’s book collection.”

While there is obviously a fallacy in the point they are trying to make, it is more important to recognize the difference between us and them. The so called experts are making a determination that seemingly upsets a larger community, than it actually satisfies. Most rationale people would agree – Dr. Seuss books, and as a culture, have never produced any real number of radical racist people throughout the nearly 100 years the books have been in circulation.

Upon this series of [digital] book burning, we’ve seen the economy respond in incredible ways. The prices of these now infamous books reflect how highly sought after they truly are. All of the books listed above have settled at around $300, with some desirable copies being signed by Dr. Seuss himself reaching upwards of $1,500. 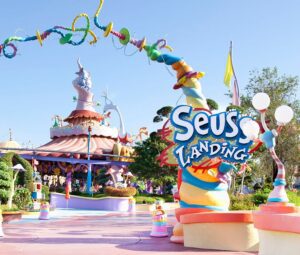 If you are a Florida local, you may know very well that Universal’s Islands of Adventure features a very popular play spot for children named Seuss Landing. This mecca for young children, or children at heart, features plenty to do from themed attractions, food and beverage options, characters and shows as well as a plethora of merchandise locations. Recently, Universal Orlando Resort found themselves under the spotlight for featuring some Seuss classics, including If I Ran the Zoo, a child exploration zone featuring multi-sensory surprises and Gerald McGrew’s fantastic creatures (currently closed due to COVID-19 safety precautions). Also under some heat, and notably the only place where Universal Orlando Resort gave an inch, was in regards to the merchandise location All the Books You Can Read.

Ashley Carter, from Spectrum News 13, reached out to Universal Studios Orlando to get their response as to what we can expect to see in regards to Seuss Landing at Universal’s Islands of Adventure.

Universal’s response reads: “Seuss Landing continues to be very popular with our guests and we value our relationship with Seuss Enterprises. We’ve removed the books from our shelves as they have asked and we’ll be evaluating our in-park experience too. But our guests can plan on continuing to be able to enjoy their favorite experiences at Seuss Landing.

As average Americans, we find ourselves in the midst of what is now being referred to as a Culture War. Our morals and values, our culture and even our pocketbooks seemingly are under attack constantly by the ‘woke’ mentality. However, as of right now, we have let the free market speak for itself, which has resulted in a win for us little people.