Habitat for Humanity Orlando has launched its fundraising effort for “Women Build Week,” a volunteer-driven event designed to empower women to take action against poverty-level housing conditions. Habitat Orlando’s goal is to complement volunteer efforts by raising $100,000 – the cost to sponsor one Habitat home. The organization needs more fundraising teams to meet their goal for Women Build Week. 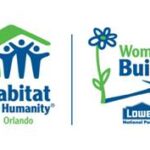 “We currently have raised more than $40,000 toward our goal – primarily through contributions from lead sponsors Universal Orlando and Delta Air Lines. We’ve also received funds from the steering committee’s efforts and networking events we call ‘FriendRaisers’,” said Dee Danmeyer, executive director of Habitat for Humanity Orlando. “Anyone interested in contributing can start their own fundraising group or donate online to one that’s already formed.”

Current donors include businesses (Universal Orlando, Delta Air Lines and National Women Build Partner Lowe’s), as well as local women’s groups. The Women Build Steering committee holds their “FriendRaiser” networking happy hours on the first Thursday of every month at the downtown Orlando Urban Flats. To date, these events have raised more than $3,000. The next event is Thursday, April 1 from 5:30 to 7 p.m. Wine and appetizers are served. Admission is $20.

”The “Friendraiser” events are a great way to network with other women – and men – who support Women Build Week, and to learn how to get more involved,” said Jessica M. Parker, a commercial real estate lawyer with Baker Hostetler LLP & the Orlando Women Build Chair. “Right now, we really need financial contributions and fundraising teams to ensure the success of Women Build Week – an event that brings together women from all walks of life to show their commitment to supporting other women and to building a better community for us all.”

Habitat for Humanity of Greater Orlando looking for volunteers

Volunteers needed for Fixing Up the Neighborhood (F.U.N.)