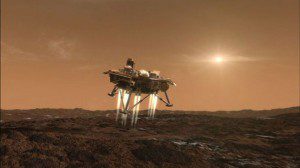 August 3, 2004: The Messenger spacecraft launched to study the planet Mercury. Following a seven-year journey, Messenger reached Mercury in 2011 and mapped out 100% of the planet for the first time.

August 5, 1930: Astronaut Neil Armstrong was born in Cleveland, Ohio. Armstrong was the first human to step foot on the moon, putting America ahead in the 1960s “Space Race” between the U.S. and the Soviet Union.

August 6, 2012: The Curiosity Rover landed on Mars. Originally planned for a 23 month mission, the main objective was to find evidence of a past environment that could support microbial life. Images sent from the touchdown area showed water had once existed in the area.

August 7, 1959: The first TV images of Earth were taken by the Explorer 6 satellite. The Explorer 6’s purpose was to study confined radiation of numerous energies in the upper atmosphere.

August 9, 1972: Rockwell International was contracted by NASA to begin construction on space shuttle Enterprise. Although Enterprise was not built to fly in space, it was used for landing tests.

August 10, 1966: Lunar Orbiter 1 was launched as the first of five Lunar Orbiter missions assigned to map out the moon’s surface before the Apollo lunar landings.

August 11, 1960: Discoverer 13, an earth-orbiting satellite, became the first recovered spacecraft when it splashed down from orbit in the Pacific Ocean.

August 12, 1977: First glide test of a space shuttle was executed by Enterprise. During this glide test, Enterprise piggybacked off a modified Boeing 747 airplane and glided safely to the floor of the Mojave Desert.

August 14, 1961: The first Saturn I rocket arrived at Cape Canaveral. Saturn I was one of two versions of the Saturn rockets (Saturn V being the other). Saturn I launched Apollo into low Earth orbit and also supported the Skylab and Apollo-Soyuz Test project.