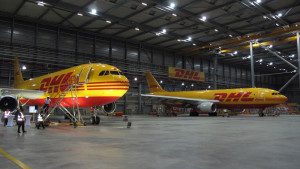 Citing concerns over numerous developments, pilots at both airlines—members of APA Teamsters Local 1224—will vote to authorize their union to call a strike should it become necessary.

“Pilots are the backbone of the logistics industry, and DHL customers and shareholders should be concerned about the company’s disregard for experienced pilots,” said Robert Kirchner, an Atlas pilot and Executive Council Chairman of APA Teamsters Local 1224.  “Pilots have sacrificed to help DHL contracted airlines succeed. We are helping DHL grow its business in the United States and building profits for all companies involved.  A strike is a last resort, but our families are not going to stand by while this German company tries to further undermine our profession and American labor standards throughout the industry.”

DHL, a global shipping and logistics company based in Germany, has a substantial influence over these two holding companies and their airlines. Since 2014, SAI’s Southern Air has operated exclusively for DHL – even co-branding its planes. DHL also provides AAWW with critical financial and operational synergies, with a 49 percent equity stake in Polar Air. If AAWW acquires SAI, its expected revenue related to DHL will rise to 27 percent – putting the two American companies further under the control of a foreign entity.

DHL AAWW and SAI have seen profits rise in recent years. DHL reported €59.2 billion (or 66.7 billion US dollars) in increased consolidated revenue this past year, with the express division — which includes the operations of AAWW and SAI — being its strongest and most profitable division.  Meanwhile, adjusted net income attributable in 2015 to AAWW’s common stockholders totaled $125.3 million, or $5.01 per diluted share, on revenues of $1.8 billion. After filing for bankruptcy in 2012, Southern Air rebounded within six months and has since expanded its fleet. AAWW is spending $110 million in cash on the acquisition of SAI.

Despite these gains, AAWW and its subsidiary carriers, Atlas Air and Polar Air, are trying to force pilots at both AAWW and SAI into an “amalgamated” contract that will have a devastating impact by suppressing wages and lowering quality of life issues for pilots at the two companies and throughout the industry. AAWW’s Atlas/Polar pilots have been working since the beginning of the year to amend their collective bargaining agreement (CBA).  Their current contract is grossly below industry standard. Meanwhile, pilots at SAI’s Southern Air sacrificed pay and workplace standards during the 2012 bankruptcy. They too have entered into contract negotiations to amend their contract.

“DHL plays a significant role in the business of these airlines as a primary customer and even an equity partner, and its impact and influence on the airline’s management is strong,” Kirchner said. “We can’t allow a foreign company like DHL to use its influence to drive down standards for American cargo pilots and undermine their job security. DHL makes billions of dollars a year based on our pilots’ hard work.  DHL should respect our pilots’ contributions and it should neither participate in nor encourage or permit its network carriers to engage in a scheme to undermine our pilots’ professions and labor standards.”

Pilots, as well as the communities where they live, are gravely concerned about the influence that DHL has over these two airlines and the possible overreach in its U.S. operations. As major equity partners and the sole customer for Southern Air, DHL’s reach may be against legal regulations that require U.S. cargo airlines to show “U.S. citizenship” of company owners and operations.  Additionally, the growing influence of DHL is concerning as the company has a record of closing bases, upending families and communities in the process. In 2008, the company announced its plan to cut 9,500 U.S. jobs. Despite overwhelming opposition from impacted communities, pilots, and members of Congress, the move resulted in 8,000 layoffs in a single town – Wilmington, Ohio – and devestated the community and its local businesses.

“My husband has been working for Atlas for 15 years, and I’m very concerned about the influence that DHL is having over the company,” said Karen Boyd, wife of Atlas pilot Captain Bobby Boyd, who live in Spokane, Washington. “I’m worried about paying our mortgage and about DHL pulling out of our community like it did in Wilmington. It’s hard to understand why companies that rely so heavily on pilots and are doing so well would force this kind of instability on our families and communities or even encourage such bad behavior.”

According to a comparison conducted by the union representing the pilots, AAWW’s Atlas/Polar pilots flying for DHL are paid considerably less and work far more than pilots who fly for American couriers, such as UPS or FedEx.

“AAWW and SAI are thriving with the growing business from DHL, but pilots are working without the job security their families need and deserve,” said another Atlas pilot, Captain Mike Griffith, who has flown for the airline for 18 years. “There is no reason why a U.S. pilot flying over the same routes for a foreign shipping company should be paid less than a pilot working for UPS or FedEx.”