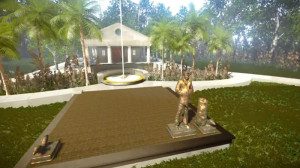 On the site where more than 650,000 young men and women began their careers in the U.S. Navy, a Lone Sailor Navy Memorial monument will be unveiled on Saturday, April 2nd. The monument is another symbol marking the importance of the Baldwin Park area, formerly Orlando Naval Training Center (NTC), to the U.S. Navy. For more than 30 years, recruits trained and graduated into the Navy at NTC.

The dedication culminates a community-wide effort that has raised close to $450,000 over the last 7 years, including support and approval by the City of Orlando in 2015 to place the memorial in Blue Jacket Park. There have been numerous supporters including these top three donors: Orange County ($100,000), Cubic Global ($25,000), and the Dr. Phillips Charities ($20,000). Additionally, more than $100,000 has been raised by the CFNL Wounded Warrior/Lone Sailor 5K/10K.

“The dedication is going to be a very exciting day for all of us,” said Central Florida Navy League President Bill “Roto” Reuter. “There are a great number of people who have been working hard to make this dream become a reality. Some of Orlando’s residents don’t know that Baldwin Park was an active Navy base from 1968 to 1998. The Lone Sailor monument will serve as a reminder of the legacy of the Navy’s presence in Central Florida, and will be an inspiration to those who are currently serving or will serve in the United States Navy.”

Orlando’s Lone Sailor Navy Memorial will feature an embedded ship’s pier in decorative concrete, and the centerpiece will be a 7-foot-tall statue called the Lone Sailor, created in 1987 by sculptor Stanley Bleifeld (1924-2011), a Navy veteran of World War II and the Navy’s official sculptor.

This is the 14th Lone Sailor Navy Memorial in the United States, and is in a truly unique integrated design, set on “hallowed ground.” The Sailor looks directly into the “grinder” – the drill field to the spot where recruits marched, trained, and eventually graduated. He also looks at the site where the famous wooden training ship, USS Blue Jacket, stood for many years.

Preceding the dedication will be the 7th annual Wounded Warrior/Lone Sailor 5K/10K at Blue Jacket Park. The proceeds from this race benefit the CFNL, and the Camaraderie Foundation, whose mission is to provide healing for invisible wounds of war through counseling, emotional and spiritual support for all branches of military services members, veterans, as well as their families.

Registration for the race begins at 6 a.m. the day of the race. For more information, visit www.CFNavyLeague.org.