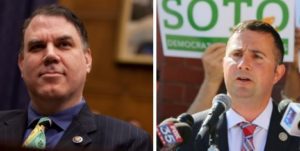 Last month, the Alan Grayson Campaign for Congress received an endorsement from Our Revolution Orlando, a group dedicated to progressive causes. The endorsement breaks from nearly every establishment Democratic endorsement being made in the primary challenge for Florida’s 9th Congressional District, as the establishment is lined up behind incumbent Darren Soto.


Vincent Polite, chair of Florida Black Progressives a statewide Our Revolution Group, stated that the organization’s endorsement of Congressman Grayson was based on his long history of addressing social concerns that are important to progressives.

“Education, wage and employment equality and healthcare access for all are issues that continue to be high impact quality of life issues that affect a large percentage of Floridians from all walks,” Polite said. “In Alan Grayson we will have a voice that will return to Washington DC, to bring those issues back to the forefront.”

And that is pretty much the central issue in the Democratic primary between Grayson and Soto. The establishment typically likes incumbents and will not want wild cards or unknown over status quo. But do voters want a member of Congress in a safe Democratic district to be outspoken, nationally recognized, media savvy but sometimes controversial? That’s the ultimate question in the match up between Grayson and Soto.

Both have proven to get things done. Both will register the same votes on the major issues raised in Congress, as they are both loyal Democrats. But Grayson has one personality, and Soto has a completely different one.

The endorsement from Our Revolution Orlando breaks with the rest of the national and local establishment endorsements, but could signal a desire from voters for something bigger, and possibly louder, in the era of Trump. Will the endorsement make an impact? Or is Soto as safe as the district is Democratic?