On November 9, 2011, the Obama Administration held the African American Policy in Action Leadership Conference. This was an all day conference, where 150 civic, academic, faith and local leaders had an opportunity to listen to the different policy department chiefs and discuss some the problems in our community. Anytime the leaders and the stakeholders get together to develop strategies to improve our community, it is a positive endeavor. 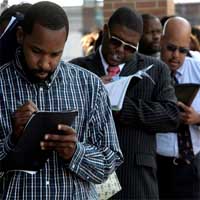 Nevertheless, it is very easy for some of the radical elements in our community to criticize partnerships and collaborations with the government, and consider President Obama not responsive to our community’s problems. They feel the president has waited too long to address our problems, and nothing will be accomplished at this conference.

This is only a small minority because still in our community, 86% African Americans polled by NBC/Wall Street Journal are satisfied with how the president is handling the economy. At the conference, White House staff members sat on panels discussing the president’s efforts and achievements. Secretary of Health and Human Services Kathleen Sebelius said, “We have some of the best health care in the world, and some of the worst care in the world. At issue is access for many of the poor and people of color.”

The daylong event was held at the Executive Office Building and the keynote speaker was Senior White House advisor Valerie Jarrett. In terms of the administration’s achievements Jarrett said, “We have made health care more accessible and more affordable. We have made our schools better equipped to prepare our children for the 21st century, and made college more affordable.”

I am sure that this statement could be debated, because many believe that our inner schools in the African American community are in deplorable shape and the majority of students are not learning. Nevertheless, Jarrett and the White House staff are showing that they care, and are engaged in making things better.

The president also talked about the need for patience and unity in order to overcome the disparity and crisis in America today. “Our parents have been through tougher times; our grandparents have been through tougher times. We know tough times. And what we also know, though, is that if we are persistent, if we are unified, and we remain hopeful, then we’ll get through these tough times and better days lie ahead,” said President Obama.

Some of Obama’s African American critics think that the president only held this conference, because he is starting to campaign for re-election. These critics could be correct in their assessment of the president, but the discussion and discourse will open doors for everyone who attended the conference.

This was an opportunity for African American leaders to network with each other across the country, and network with government officials. They can now pick up the phone or email someone, who has influence to make a difference.

Hopefully, out of this conference will come action plans, and critical points that the government can work on to improve our community. As our community prepares for the 2012 election, it is important that we arrive at a consensus that we can agree on, as an African American platform. Economic inequality, educational inequality, healthcare accessibility, and mass incarceration should lead the list on an African American platform for 2012.