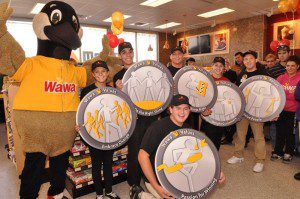 This year and all years to come, April 16th will be known as Wawa Day, honoring the most important date in Wawa’s history—the day Wawa opened its first convenience store in 1964, and the day Wawa launched the Wawa Foundation, its new nonprofit through which all charitable giving is now channeled. To mark the magnitude of the day this April 16, 2015, Wawa will be giving away more than 1.5 million cups of coffee through free coffee to all customers, chain-wide, announcing $1 million from the Wawa Foundation’s first quarter grant distributions, and celebrating millions of magical customer moments displayed on in-store, digital signage at all Wawa stores.  During Wawa day, Wawa will also be hosting six celebrations throughout its six-state operating area.

Wawa’s Florida Wawa Day Celebration will be held during the grand opening of the newest store in Orlando located at 6500 W. Sand Lake Rd. store.  The Orlando Wawa Day events will include:

MacDade Boulevard in Folsom, Pa. Last year, on April 16, 2014, Wawa celebrated its 50th anniversary in the retail space and marked this milestone with the launch of the Wawa Foundation, Wawa’s 501c (3) non-profit organization founded to encompass all of Wawa’s charitable giving. The Wawa foundation is committed to donating $50 million to causes supporting health, hunger and every day heroes by 2019. This year and all years moving forward, Wawa will use April 16th as a day to celebrate its past and future.  Wawa’s Philadelphia celebration honors its local and national charity partners, and the incredible customers that will be a key part of Wawa’s next 50 years of history.

Demonstration at Wawa for Concerns of Tobacco Farmworkers