Wawa Inc. today announced their official entrance into the Central Florida market, with the ground breaking celebration of their first store in the state of Florida! 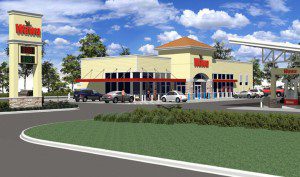 Located directly across from Sea World at the intersection of Central Florida Parkway & International Drive in Orange County, this location is the first of five Wawa stores to go under construction before the year’s end. In addition to marking the official start of construction, the groundbreaking event provides an opportunity for Wawa representatives to reveal, for the first time to the public, a giant store rendering, premiering the new look and store design for the site.

In addition to the Central Florida Parkway location, Wawa will break ground on the following four locations:

Wawa will celebrate the grand opening of their first Florida store on July 18, 2012, with four more stores opening within one month’s time. Wawa plans to open 20 stores in 2013, 25 stores in 2014 and 25 stores in 2015, and projects it will open 100 stores in the Central Florida market in the next five years.

The new stores will each employ nearly 35 associates, all of which are new positions brought to the area through the development of the stores. Associates in these full and part-time positions will not only receive competitive salaries and health benefits, but will have the opportunity to be enrolled in Wawa’s employee stock ownership plan.