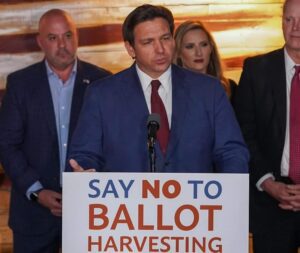 In the past municipal elections, major election fraud and ballot harvesting accusations have been made against Mayor Dyer, who is a Democrat, but local authorities and FDLE failed to investigate. Orlando City Commissioner hired a lot of Dyer’s ballot harvesters for her campaigns and more complaints were filed, but nothing was looked into. That doesn’t seem to be the case any more.

“Twenty years ago, nobody thought Florida was a prime example of how to conduct elections, but we have become a national leader by running the most secure elections in the country,” said Governor DeSantis. “We need to do more to ensure our elections remain secure. We have ended ballot harvesting, stopped drop boxes and the mass mailing of ballots, and banned Zuckerbucks, and this bill will give us more resources to make sure bad actors are held accountable.”

Finally, the bill requires the Department of State to recommend a plan on how to strengthen ID requirements for mail-in ballots. Collecting absentee ballots and having signatures that don’t go over the seal are again typical activities in Orlando and Orange County, no matter what Supervisor of Elections Bill Cowles claims. The Department of State must submit a report on the plan and draft legislation for any statutory changes needed to implement the plan by February 1, 2023. The plan will include how to prescribe the use of a Florida driver license number, Florida identification card number, social security number, or any part thereof to confirm the identity of each elector returning a vote-by-mail-ballot.

“Governor DeSantis has made elections integrity a top priority from the very beginning of his administration, taking steps to ensure we invested in our elections systems, strengthened our cyber defenses, modernized equipment, updated voter rolls, and improved transparency, and we’ve seen results,” said Florida Secretary of State, Laurel M. Lee. “As Florida’s Chief Elections Official, I share Governor DeSantis’ strong commitment to elections integrity. We want to ensure that every Floridian can have confidence that in Florida, we do elections right.”

“Florida leads the nation in free and fair elections because Governor DeSantis and the Legislature have taken a proactive approach to address any issues,” said Senate President Wilton Simpson. “Voter confidence in the integrity of our elections is essential to maintaining a democratic form of government, and I am grateful to Governor DeSantis for making election integrity in this state a focus of his administration. When people and organizations interfere with Florida elections, there are consequences.”

“I am proud to have worked with Governor DeSantis and his team to deliver a transformational elections reform bill,” said Senator Travis Hutson. “This law puts Florida at the forefront of election security and transparency.”

“In 2020, Florida set the example of a well-run election for the rest of the nation to see,” said Representative Daniel Perez. “SB 524 is an example of our commitment to always do better and continue to be the best state in the nation for secure and accurate election results.”

The bill also requires voter list maintenance to be conducted annually by supervisors of elections in order to combat the possibility of fraudulent voting.