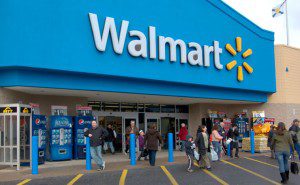 Walmart, the mega-retailer, announced Thursday, it will raise the starting pay of its lowest-paid workers beginning in April.

In a letter to its associates, CEO Doug McMillion said, the entry wage will be lifted to at least $9 an hour in April and by February 2016, all current associates will earn at least $10 an hour. The starting wage for some department manager positions will be at least $13 an hour this summer and at least $15 an hour next year.

The company said 500,000 full-time and part-time, more than one-third of its workforce at Walmart stores in the U.S and Sam’s Clubs will receive the pay increase. Walmart also said, workers will have greater control over their schedules and gave a commitment to invest more in training, thereby allowing entry-level workers greater opportunity to move up the ranks and into other career paths.

Walmart’s low pay and work conditions have been the focus of protests by some workers and labor unions over the past three years.  They have called for the mega-retailer to raise the wage to at least $15 an hour.

Walmart’s announced increases come after several states have raised their minimum wages from the federal level of $7.25.

The company said the planned wage increases will be more than $1 billion this fiscal year.