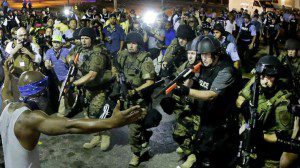 There are many Gantt Report fans that were born at night…..but not last night!

In Missouri and across America, African Americans and others are protesting the killing of unarmed teenager Michael Brown by a Missouri law enforcer.

Police supporters, Fox news reporters and others have suggested that many protesters are hooligans, arsonists, thugs and thieves!

It is not unusual for the imperialist press to describe victims of injustice as perpetrators and people that brutalize, hurt or shoot innocent people as “victims”.

When Black Americans are oppressed, exploited and mistreated, what should they do?

Well, trial lawyers who stand to make huge sums of money off of the pain and suffering of others suggest peaceful protests. Some religious leaders, seeking television and radio fame at the expense of brutalized or murdered church goers suggest prayer.

The Gantt Report has no problem with either of those suggestions but The Gantt Report also says violent action, in self defense of person or property, should also be a consideration!

Can I prove it? Yes!

When the Biblical Hebrew people were victimized by Biblical Pharaohs and other law enforcers of that times, they used violence to stop violence.

David didn’t throw a prayer at Goliath, he used a sling shot to hurl a stone at the law enforcing giant!

Even today, when Israeli citizens and soldiers are killed by non-Israelis, no one tells Jews to peacefully protest or to pray. It is acceptable for Jews to send hit men to find and kill people that kill and/or hurt Jews.

In America, when Great Britain law enforcers patrolled American colonies, colonists didn’t say if we march and pray soldiers from England will stop mistreating us and taxation without representation would cease. American colonists said “Give me liberty, or give me death”!

When terrorists killed innocent people in the 9-11 attack on the World Trade Center no one said let’s march peacefully and pray for Osama Bin Laden. Americans said this country would not rest until Al Queda terrorists were captured and/or killed!

African Americans are always told they can protest but they can only protest injustice, inequality, police brutality, terror and murder of unarmed children in the way that red-necked bigots, closet klansmen and police agencies want Black people to protest.

I say African Americans have to defend themselves like Floyd “Money” Mayweather does and protect themselves and Black communities at all times and like Malcolm X says, “By any means necessary”!

When law enforcers and African Americans are involved in physical confrontations, in many cases the law enforcer says he was attacked and shows some minor bruises, perhaps self-inflicted, but the many Blacks in confrontations end up dead and can never tell their side of the confrontation story.

When some law enforcers use deadly force and are questioned about it oftentimes they are instructed to say they were in fear or that they were assaulted.

Hmmm? Have you ever wondered why no Black officers are accused of killing unarmed white kids? Have you wondered how klansmen, neo-nazis and skinheads can be hired by police departments but no Black Panthers, Black Nationalists or members of the Fruits of Islam can even dream about being hired as law enforcers to patrol white neighborhoods or join police forces at all?

A Black pre-teen, a 12-year-old child, was recently killed by white cops after police were told that the gun held by the child was probably “fake”. Did they ask questions about whether the gun was fake or did they just seize an opportunity to gun down a very young Black child?

Everyone, especially African Americans should obey the law, respect law enforcers and carry themselves in a law abiding manner.

But we cannot sit back and allow Black child after Black child to be gunned down by trigger happy cops, lying neighborhood watchmen and other beasts with badges day in and day out!

Don’t plot and plan to throw rocks or start fires or snipe people shooting at innocent children but you must keep all of your Black community options open as considerations!

And, don’t act like you don’t know about law enforcement or non-enforcement involvement in slave patrols, lynchings, hangings, whippings, beatings, Rosewood, Tulsa, and killings of Black men, women and children.

Rodney King did not beat himself. The 12-year-old child with a toy gun did not shoot himself!

Moment of Truth Draws Near for Dyer, City Commissioners To Speak On Orlando Police Brutality

Is Tampa the New Ferguson?