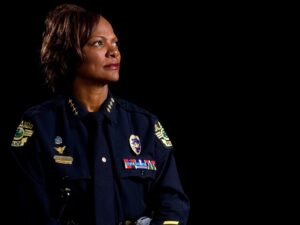 In 2020, the United States saw the biggest rise in murder since the start of national record-keeping in 1960, and now members of Congress want to act. Representative Val Demings, a former 27-year police officer and Chief of the Orlando Police Department, introduced the Violent Incident Clearance and Technological Investigative Methods (VICTIM) Act. The legislation would establish a Department of Justice grant program to hire, train, and retain detectives and victim services personnel to investigate shootings and support victims.

“Real life isn’t like CSI: Miami,” said Rep. Demings. “I saw as a law enforcement officer, detective, and chief of police that gun crimes are oftentimes difficult to investigate and solve. Simply put, many agencies lack the resources they need to bring justice to these cases and closure for families. Half of gun murders in the United States go unsolved, and victims are often left with no justice and little support. This legislation would inject critical new funding into America’s law enforcement agencies to hire and train detectives and specialists specifically committed to investigate unsolved crimes, comfort victims, and bring the guilty to justice.”

The VICTIM Act would establish a grant program at the Department of Justice to provide resources to State, Tribal, and local law enforcement agencies to assist them improve their clearance rates for homicides and non-fatal shootings. Specifically, the grants provided by the VICTIM Act would be used to:

Recipients of the grants would be required to report to the DOJ information regarding how the money was spent and how it affected clearance rates for homicides and non-fatal shootings. The National Institute of Justice will periodically evaluate the effectiveness of the policies and procedures implemented by the grantees to improve clearance rates and report to Congress on its conclusions.

“Our nation’s cities and communities are experiencing a historic rise in violent crime,” said Bill Johnson, Executive Director of the National Association of Police Organizations. “Murders and non-fatal shootings are going unresolved at higher rates as law enforcement agencies do not have the officers and resources to dedicate to improving clearance rates for these horrendous crimes. The VICTIM Act will help address this issue by supplying much needed grant funding to agencies to fill, replenish, and train their detective and homicide personnel. Through this legislation, law enforcement will be able to focus on solving these violent crimes that have such a detrimental impact on our communities and improve the services that they render to victims. We support the VICTIM Act and thank Congresswoman Demings for her leadership on this issue.”