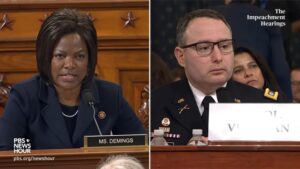 Representative Val Demings, who served as a House Impeachment Manager in the trial of President Donald Trump, commented on U.S. Army Lt. Colonel Alexander Vindman’s resignation following his claims of personal and professional retaliation from the President. Donald Trump has made his opinion quite clear since the failed impeachment hearings.

“Today the United States lost the national defense expertise of a decorated war hero due to political retaliation from a president who dodged the draft and attacked Gold Star families,” Rep. Demings said. “Lt. Col. Vindman said in his testimony that in America, ‘right matters.’ I call on all of us to keep fighting for that America.”


As a member of the House Intelligence and Judiciary Committee, Rep. Demings heard testimony from Lt. Colonel Vindman and other public servants during the House’s impeachment hearings.

Lt. Colonel Vindman obeyed a legal subpoena from the U.S. House of Representatives to appear and give testimony during the House Democrats’ investigation into President Trump and allegations of abuse of power. In what Demings calls “acts of retaliation,” Lt. Colonel Vindman, as well as his brother, Yevgeny Vindman, were both fired from high-ranking military positions.