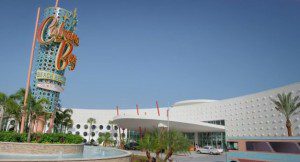 Universal Orlando officially opened the Cabana Bay Beach Resort, its fourth on site hotel, on Monday. The new hotel features a stunning design with bold colors, retro-inspired architecture and sweeping vistas that transport guests back to a time of relaxation and endless family fun, according to a news release from Universal.

Amenities at the Cabana Bay Beach Resort include:

There are plan in the works for a second 8,000-square-foot zero entry pool, Universal Orlando’s first lazy river at an on-site hotel and The Hideaway Bar & Grill, slated to open in summer 2014.

“We’ve sought to create a special place where families can spend time together and create long-lasting memories outside of the theme parks,” said Russ Dagon, Vice President and Executive Project Director, Universal Creative, in a statement. “From the moment they step inside, families will be transported back to a different, more relaxing time.”

The new hotel is expected to add at least 250 low-paid jobs to the area – maids, porters, waiters, cooks and concierges, among others.