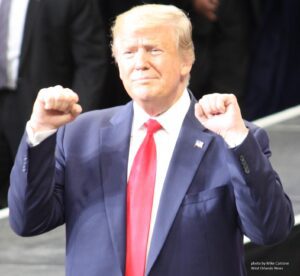 Former President Donald Trump remains a political force greater than any current efforts to censor or criticize him and now he is discussing potential book deals. In a statement, Trump also shed some light that he turned down pitches from unlikely sources, which would not be surprising that big name publishers want to capitalize on him considering how powerful the Trump brand remains despite constant attacks. But Trump also teased more than a book in the mysterious statement. And while he did say he has turned down at least two book deals, he admits he is “writing like crazy.”


“I turned down two book deals, from the most unlikely of publishers, in that I do not want to do such a deal right now,” Trump said in a statement. “I’m writing like crazy anyway, however, and when the time comes, you’ll see the book of all books.”

But he ended his statement with a tease to something more than a book.

What will it be? Stay tuned to find out.

Trump is also still pushing on the latest revelations about a new COVID-19 investigation into the Wuhan lab and the Dr. Fauci emails. Trump has attacked Dr. Fauci as “science fiction” given the latest news. He is also taking union members to task for supporting Joe Biden now that the Keystone Pipeline project is officially killed.

So, while Trump may be “writing like crazy,” it also seems like he is on quite the political offensive still and still not ready to back down.