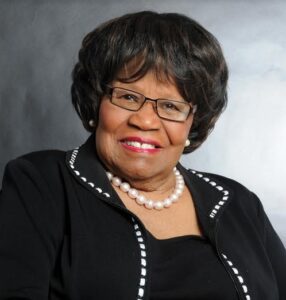 Former U.S. Representative Carrie Meek, who was the daughter of a sharecropper and granddaughter of a slave, died at home in Miami on Sunday, November 28th. She was 95. Meek is known for breaking barriers throughout her political career and is a major historical figure in Florida politics.


“Carrie Meek was our family matriarch who fulfilled this role for the entire South Florida community. She was a bridge builder and healer, a unifier with a legacy defined by selfless public service. Forever the educator, the Congresswoman taught us all lessons about justice and morality. Her approach was rooted in kindness and humility. Carrie Meek made our society stronger and more equitable — an outcome that is an everlasting tribute to our beloved mother. She was guided by her faith, always inspired by the outpouring of love and community support. We humbly ask for your prayers at this time.”

Meek represented Florida’s 17th congressional district from 1993 to 2003. According to her congressional biography, after serving as Miami-Dade Community College’s first Black professor, associate dean and assistant to the vice president, Meek beat out 12 other candidates when she ran for the Florida state House in 1978. Just five years later, she became the first Black woman elected to the state senate. Meek would go on to leverage her career in state government into a successful US House campaign in 1992. Alongside former Reps. Corrine Brown and Alcee Hastings, Meek joined Congress as one of the first Black members elected since the Reconstruction Era.

“I was deeply hurt to learn of the passing today of Florida A&M University alumna and former Congresswoman Carrie Meek,” said Florida A&M University President Larry Robinson, Ph.D. “She rose from the Florida House of Representatives to become the first African American woman elected to the Florida Senate where she served on the Education Appropriations Subcommittee. She went on to be elected the first Black member of Congress from Florida since Reconstruction. Once in office, Meek faced the task of helping her district recover from the devastation of Hurricane Andrew. Her efforts helped provide $100 million in federal assistance to rebuild Dade County. She lived what we tell our students, ‘You can get there from FAMU.’”

Many remembered her legacy as a social justice activist in Congress and a lifelong educator who mentored young people in the communities she represented. Even after her retirement from public service in 2002, Meek continued to dedicate herself to social causes like housing and economic opportunities for poor residents through the Carrie P. Meek Foundation, based in Miami-Dade County.

Her children, Lucia Davis-Raiford, Sheila Davis Kinui and former U.S. Rep. Kendrick B. Meek, said in a statement that Meek was “our family matriarch.”

Orlando Rep. Darren Soto also praised Meek as a trailblazer “with a big heart & much courage,” and he tweeted: “She was a champion of civil rights, healthcare, education, jobs & housing. She protected our state thru Hurricane Andrew & base closures. We will strive to follow her amazing legacy!”