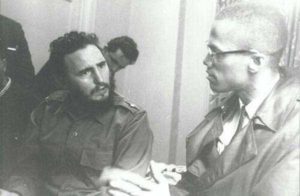 When politicians of any nation disagree with or hate another political leader the haters are quick to call their adversaries “thugs, tyrants or dictators.”

Whenever western powers want to invade, colonize, rob or destroy, they justify it by calling the political leader of that country a despot.

The way “El Comandante,” the late leader of the Cuban Revolution is being described by the imperialist press is biased, one-sided and in many cases, flat-out wrong!

When the legislators and media discuss Cuba and talk about “democracy,” they are talking about capitalistic democracy where the rich get rich by taking advantage of the poor. Cuba is a different democracy. It is a socialist democracy.

A dictator is a ruler with absolute authority. Well, what is the difference between the Queen of England, the Queen of the Netherlands, the King of Saudi Arabia, the King of Jordan or the former Shah of Iran who all have similar power and Fidel Castro? If the west likes you, you are good and if they don’t you are bad.

If you threaten to kill the United States President or plot to overthrow the United States government, you will be arrested and jailed. If you talk about Cuba’s leader and you are arrested, you are being denied freedom of speech!

If you only get your news from social media, the imperialist press or people who voluntarily, perhaps, left Cuba and now call yourself an “exile,” I can understand why you would feel some kind of way.

But when I hear the phrase “Make America great again” it makes me think about the good old days in Cuba that the media and politicians will never tell you about.

I believe it is safe to say that Cuba was once a mobster and gangster paradise, so to speak.

Some of the people who once had wealth and owned many of the casinos, hotels and other lucrative businesses in Cuba have familiar names.

Don’t act like you’ve never heard  of Charles “Lucky” Luciano. Luciano urged all of his “friends” to meet with him in Cuba at a meeting called the “Havana Conference”. People that met with him included Meyer Lansky (whose silent business partner was former Cuban President Fulgencio Batista y Zaldivar), Joseph Lanza, Frank Costello, Joe Adonis, Al Capone cousins Charlie, Rocco and Joseph Fishetti, Albert The Mad Hatter” Anastasia, Vito Genovese and a long list of others.

Of course, these guys came to Cuba to restore “democracy” and to enable “free speech”. They would never exploit the Cuban citizens even if they were allowed and encouraged to do so by President Batista.

So, many of the people who lost businesses after the Cuban revolution, were friends and cohorts of Batista.

Now what did Fidel to for Blacks and Africans? Well, before Castro, there was rigid and very harsh discrimination and segregation against Black Cubans by the government. After Castro gained leadership, those government policies were ended.

Fidel dispatched thousands and thousands of Cuban soldiers to join Africans in their fight for African liberation from Western racists and colonialists while the country you love looked the other way.

When Castro came to New York and was unhappy where he was staying he gathered his entourage, left and stayed at Harlem’s Theresa Hotel, showing his support for Black business.

When the government you love was slow to assist Blacks after Hurricane Katrina in New Orleans, Fidel offered to send doctors and others to help and assist hurricane victims but President George Bush refused the offer.

It doesn’t bother me that some Cuban Americans celebrated the passing of Fidel Castro but they shouldn’t be mad with me and other Black and African people for considering him a friend and supporter.

(Buy Gantt’s latest book, “Beast Too: Dead Man Writing” onAmazon.com and from bookstores everywhere. Contact Lucius at www.allworldconsultants.net. And, if you want to,“Like” The Gantt Report page on Facebook.)