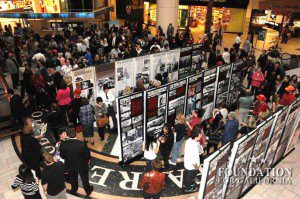 As acts of intolerance continue to afflict society amid reports of violence, bullying and anti-Semitic vandalism in America’s neighborhoods, many are left wondering, how can we best combat these dangerous trends of intolerance and hatred?

The Simon Wiesenthal Center’s “The Courage to Remember: The Holocaust 1933-1945” traveling exhibit strives to address this issue at its core, empowering people to educate themselves and stand up to discrimination as it opens to the public in a ribbon cutting ceremony at Orlando Christian Preparatory in Orlando on Wednesday, September 17, 2014 at 1:30pm.

In attendance at the September 17, 1:30pm event will be leaders from the Jewish community in addition to civic, educational, business, government, religious and community figures.  A Holocaust Survivor will provide remarks, presenting an opportunity for everyone present to learn more about this tragic episode of the 20th century.

“Two decades after we first designed this exhibit, its lesson is still vital to peace at home and abroad,” said Rabbi Abraham Cooper, Associate Dean of the Simon Wiesenthal Center. “Its timeless messages reflect the words of Mr. Simon Wiesenthal: ‘Hope lives when people remember.'”

“The Courage to Remember: The Holocaust 1933-1945” traveling exhibit, produced by the Simon Wiesenthal Center’s Museum of Tolerance, presented by the Foundation for California and made possible by a grant from SNCF, has celebrated 20 years of international acclaim and a highly successful tour throughout California, the Southeast and across 6 continents.  Consisting of 42 panels, it is an historical account of the Nazis’ murderous campaign in which 6 million Jews and others (political dissidents, P.O.W.’s, Slavs, Gypsies, homosexuals and the mentally ill) were killed between 1933 and 1945.  With nearly 200 original photographs, many never seen before by the general public, “The Courage To Remember” offers a powerful, compelling insight into the Holocaust.

“‘The Courage To Remember’ empowers young and old to learn from history, confront bigotry and fight for justice.  This exhibit is not a luxury, it is a necessity in all communities,” said Dr. Alfred Balitzer, Chairman of the Foundation For California.

For more information on “The Courage to Remember,” its partners and schedule, and to see photos and videos from opening events, please visit www.couragetoremember.com, follow: twitter.com/courageremember or contact Ted Gover at ctr1.tg@gmail.com or (562)355-1325.