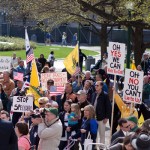 Some of the Tea Party contenders, who GOP research shows are still registered Democrats, independents or Libertarians, have filed to run against Republican incumbents, including House Speaker-designate Dean Cannon, R-Winter Park, and Sen. Mike Haridopolos, R-Merritt Island, who is positioned to become the next Senate president.

“The recent flurry of last-minute filings by so-called ‘Tea Party candidates’ looks awfully suspicious when many of the candidates were recently registered Democrats and have filed to run in districts hundreds of miles away from their residences,” said Florida Republican Party Chairman John Thrasher, who is also a state senator from St. Augustine.

“While a few Tea Party candidates across the state do have ties to the Tea Party movement, in the majority of instances, it appears that the Democrats have coordinated a dishonest attempt to hide phony candidates behind the name ‘Tea Party’ and confuse voters,” he added.

“They’re acting like they’re afraid that the black helicopters are going to come and get them,” Jotkoff said. “But I think it’s time for John Thrasher to take off the tin-foil hat and start campaign season.”

But Florida Tea Party Chairman Fred O’Neal, who has been vying with rival Everett Wilkinson for control of the movement, said the burgeoning anti-tax and anti-big government party has honed-in on Republican incumbents on purpose.

“We promised months ago that Republicans that merely talked about lower taxes but then voted for bigger government would be targeted,” O’Neal said. “We will expose these RINO (Republican-in-name-only) Republicans as the frauds they are. Taxpayers have a right to a real choice and the Tea Party will give it to them.”

Florida has a history with mystery when it comes to last-minute candidates running from non-mainstream parties. In 2008, Democrats said they were victimized by Republicans who they accused of steering “Green Party” candidates into seats to hurt Democratic chances.

Five Green Party contenders were late entries that year in House districts – and were later disavowed by representatives of the Green Party of Florida. House Democrats later talked of revenge – which Republicans now say they’ve exacted through the Tea Party entrants.

Republicans theorize that the Tea Party contenders are designed to siphon votes from GOP candidates, effectively dividing conservative voters in select districts. In some cases, such results could protect House Democratic incumbents who were seen as facing formidable Republican challengers.

Rep. Debbie Boyd, D-Newberry, is the lone Democrat running in a rural Gainesville-area district, but drew a Tea Party challenger, Stephen Taylor, who records show is a registered Democrat and resident of Tallahassee. While it has a majority Democratic voter registration, the relatively conservative district has four Republicans also vying to challenge her in November when Taylor’s name would appear on the ballot.

A registered Democrat, Jon Foley has qualified to run as a Tea Party candidate in the seat held by Rep. Steve Precourt, R-Orlando. An Orlando-area resident, Ryan Swyers, also has qualified to run in a Broward County House district which Republicans hope to maintain, despite it being vacated by Rep. Ellyn Bogdanoff, R-Fort Lauderdale, a candidate for state Senate.

Tea Party leaders insist their candidates are for real – and not fabricated to help Democrats.

“Just look at the millions of dollars that Cannon and Haridopolos have raised so far from lobbyists,” said O’Neal, himself a former Democrat. “It is an embarrassment that the Florida Legislature is for sale to the highest bidder.”

Florida Dems Get It Wrong Again in Nan Rich Fiasco