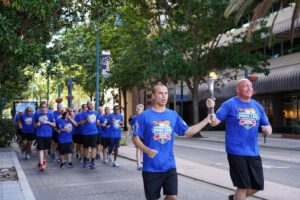 The 2022 Special Olympics USA Games Law Enforcement Torch Run for Special Olympics concluded the multi-state, two-week tour as it arrived in downtown Orlando for the final stop after its historic trek. The Final Leg — which began in Chicago, traveled the Midwest and East coast, as well as along both Florida coasts — ended in Orlando, as it gets ready to light a custom-made cauldron to officially start the Games.


Members of law enforcement and six Special Olympics athletes were charged with protecting the Flame of Hope and together proudly made several visits around Orlando to help celebrate the largest USA Games in history, which will take place June 5th to June 12th. For over 40 years, the law enforcement community has served as a dedicated legion of protectors and supporters for Special Olympics.

Law enforcement officers and Special Olympics athletes brought the torch to Orlando City Hall ahead of the Games. A native of Missouri, Brett Harper is one of the inspiring Special Olympics USA Games participants who helped the Flame of Hope torch make its way to City Hall. Brett has participated in bowling and track and field for 10 years and is proud to be an advocate for himself and others.

On Sunday morning, the torch will make its way to Exploria Stadium to start the Games.

Orlando will celebrate the determination and perseverance of these athletes, showcasing Orlando’s inclusiveness and commitment to creating a welcoming community for all.

The 2022 Special Olympics USA Games, presented by Jersey Mike’s Subs, will bring 5,500 athletes and coaches from all 50 states and the Caribbean to Orlando and Central Florida. The USA Games is hosted once every four years and, for the first time in its history, will have 19 Olympic-style team and individual sports.