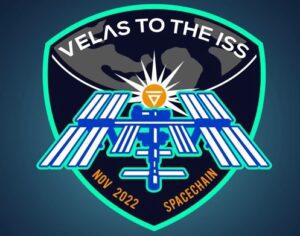 SpaceChain celebrated the successful launch of its second Ethereum Virtual Machine (EVM) payload into space aboard a SpaceX Falcon 9 rocket, which is on its way to the International Space Station for installation via the SpaceX Dragon 2 spacecraft. The mission marks SpaceChain’s seventh successful blockchain payload launch into space, and the second integration of its payload with Velas, the world’s fastest EVM blockchain and open-source platform for decentralized applications.

Once installed and tested on the ISS via Nanoracks, the space node will be capable of processing Velas blockchain on the ISS and sending Velas digital assets from space, such as VLX, tokens and NFTs, in addition to performing complete high-speed transaction services across the Velas platform, including smart contract deployment and coin minting.

The company said the mission not only reaffirms SpaceChain’s commitment in empowering blockchain companies to harness space as a platform for business innovation, and the high customizability of blockchain-enabled space nodes in meeting diverse industry needs, it also validates the possibility and feasibility of performing high-speed blockchain processing in space, and serves as a successful scientific demonstration of SpaceChain’s highly integrative space-as-a-service solutions with EVM compatible blockchain technology.

“As the world’s most progressive enterprises take their businesses to space, they will require a high-speed decentralized infrastructure to meet demands and growth fueled by protocols and financial applications,” said Cliff Beek, CEO of SpaceChain. “Our collaboration with Velas will help lay the foundation for high-speed and ultra-secure blockchain processing and transactions in space, which we believe will become increasingly crucial for those looking to harness space technologies for competitive advantage in the burgeoning space-for-earth economy.”

“It is a historical milestone for Velas to have our integrated space node tested on the ISS through SpaceChain. We are thrilled to see this vision realized, which took many months of planning and coordination with stakeholders in the space industry,” said Farkhad Shagulyamov, co-founder and CEO of Velas. “We are looking forward to strengthening our collaborative effort with SpaceChain to create innovative solutions and business use cases in the near term.”


Velas is the fastest EVM blockchain that is capable of handling 50,000+ transactions per seconds (TPS) with an innovative hybrid consensus of Delegated Proof-of-Stake (DPoS) and Proof-of-History (PoH).

The collaboration between SpaceChain and Velas is poised to improve consensus mechanisms in blockchain, and help generate use cases of space-based blockchain and decentralized infrastructure outside of financial services and cryptocurrencies.