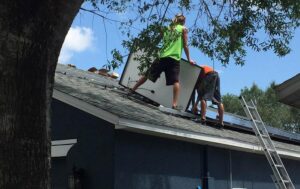 “What better way to share the love for your neighbor than by going solar together?” said Heaven Campbell, Florida program director for Solar United Neighbors. “The co-op will enable Seminole County and Winter Park homeowners and business owners to join the growing community of people saving money by harnessing solar power, and join the movement for a clean and equitable energy system.”


The co-op is free to join and open to homeowners and business owners in Seminole County and the City of Winter Park. Together, co-op members will learn about solar energy and leverage their numbers to purchase individual solar systems at a competitive price and top quality.

After a competitive bidding process facilitated by SUN, which remains vendor neutral, co-op members will select a single solar company to complete the installations. Joining the co-op does not obligate members to purchase solar. Instead, members will have the option to individually purchase panels and electric vehicle chargers based on the installer’s group rate.

Meghan McCollum, local homeowner who went solar through the first Seminole solar co-op in 2017, said, “We wanted to go solar years ago, but it was too overwhelming to figure out on our own— we had no idea where to even start. Joining the co-op provided us with great resources and allowed us to meet neighbors that were eager to share their knowledge and experience. I ended up joining the selection committee. We went solar to take control of our electric costs and to be more environmentally friendly.”

Also partnering on the co-op are the League of Women Voters of Seminole County, Seminole Citizens’ Climate Lobby, and Seminole Audubon Society.

“Aside from the benefits of supporting job creation and the goal of furthering clean energy, the co-op allows Seminole County residents to take advantage of collective buying powers,” said said Sharon Lynn, first vice president of the League of Women Voters of Seminole County. “The League of Women Voters was an early supporter of the co-ops and for the past several years has partnered with Solar United Neighbors, significantly expanding residential rooftop solar in Florida.”

SUN has hosted 70 solar co-ops in Florida since 2015, including two in Seminole County. According to the group’s estimates, the 2,102 homes and businesses that now have solar panels because of co-ops represent: 20.5 MW of solar power, $47.9 million in local solar spending, and more than 698.6 million lbs. of lifetime carbon offsets.

The informational sessions are planned for: