There is a valid need of cakes and cupcakes for various venues such as weddings, birthdays, holidays, and observances. The need is no less valid in order to satisfy one’s need for sweets. Whatever the need, whatever the design, whatever the venue, the enterprising ladies at Velvet Luxe Bakery have it covered.

The newly established bakery services the Miami area but has plans to expand into Central Florida and eventually cover the entire peninsula.

The bakery is the brainchild of Kiara Jones, 27, and Aqueelah Bridges, 30. Jones is a 2007 graduate of Mainland High School. In 2009, she graduated from the Miami-based, Florida Culinary Institute with a degree in Baking and Pastries. Bridges is a 2004 graduate of Miami-Northwestern and is currently studying business administration and marketing/advertising at Broward College.

Jones has been cooking pastries since receiving her degree and together with Bridges, the two have built a viable, affordable and professional niche in the realm of cakes and cupcakes. Not only does Velvet Luxe produce elaborate and detailed ensembles…they taste good. The two first cousins split responsibilities equally. Jones tends to the baking and crafting needs, Bridges handles marketing and the business aspects of the joint venture.

For her first cake design ever, Jones was asked to produce a first order Carnival Cake, (complete with popcorn, a merry-go-round, and cotton candy). She pulled it off and never looked back.

“My desire to excel in the world of cakes and confections comes from my grandmother,” Jones said. “I recall the many cakes, pies, cookies, and other sweets she created for us as children. It just felt natural to pursue a career known to bring smiles to people’s faces,” Jones fondly remembered.

Jones said business has steadily been growing as word spread about the designs and presentations the bakery has become known for. Thus far the largest order was for a family reunion, which equated into additional word of mouth for the business. 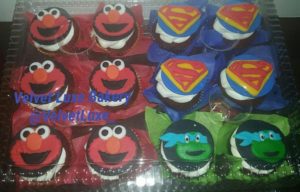 Jones has produced a plethora of dazzling displays including: a number twenty-one for a birthday party, the above mentioned carnival cake, Teenage Mutant Ninja Turtles, Spiderman, Batman, Cookie Monster, Jake the Pirate cakes and cupcakes, and an elaborate CHANEL gift box.

The bakery has filled 17 individual orders for cakes and cupcakes and has serviced birthday parties, family reunions, and baby showers to-date.

Velvet Luxe currently services Dade County, Broward County, and the West Palm Beach area. The bakery has garnered a decent following in the Miami area but is hopeful in expanding up the peninsula. After all, half of the ownership is Volusia County bred. The word is out in the 305 but there are many more area codes in need of carefully constructed cakes and cupcakes for the next occasion. “We plan on expanding into Central Florida just as soon as we can get the shipping worked out,” Jones said.

“Nothing is too difficult to produce. More importantly, my cakes and cupcakes taste good.” Jones concluded.

A gander at the bakery Facebook page under Velvet Luxe, backs up Jones’ statement. The page is filed with examples of the creations.

Velvet Luxe Bakery can be reached on Twitter – @Velvet Luxe_ , on Facebook under Velvet Luxe, or via email at: velvetluxe16@gmail.com.

Most bookings are done via social network for fast, friendly turn around. 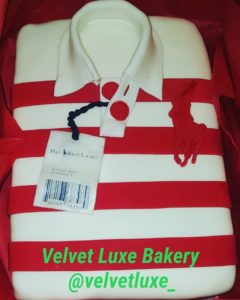 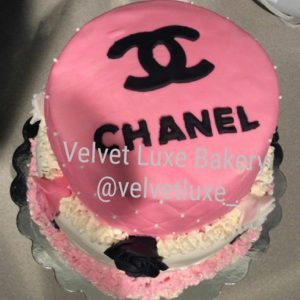