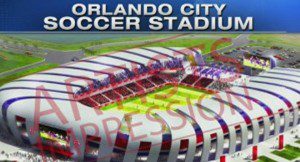 If you read the Orlando Sentinel on Saturday, you saw the article “City plans to condemn church for stadium are wrong” by Scott Maxwell. And the headline gets it right (this time), but the takeover of this church is just one of the many wrongs in the Orlando soccer stadium deal pushed by Buddy Dyer and Teresa Jacobs. Another wrong comes from the hypocrisy of the Orlando Sentinel and Maxwell in covering the MLS stadium proposal.

Just 2 months ago — TWO months ago — Scott Maxwell called this same soccer stadium deal “Orlando’s best sports deal” in his column on 11/19/13. This is indicative of some larger local problems surrounding what is really wrong in Orlando.

Obviously the Orlando Sentinel, Scott Maxwell and everyone else who championed the stadium proposal didn’t actually know what the “deal” really was. Maxwell knows the Mayor. The Sentinel has very close relationship with the City and Dyer administration. They know better. Some of us were fighting this from the start, knowing the City of Orlando and Buddy Dyer intended to take this church and the other Parramore land all along.

You see, that IS the deal for the soccer team — and always was the deal. The only way this deal could be “wrong” as Scott Maxwell is now saying, would be if this deal was WRONG for Orlando and Parramore (and this church) from the start, not the “best deal” as Scott Maxwell said just weeks ago.

The old shiny object distraction worked again in Orlando, huh? Is it possible the city is still able to pull this kind of fast one on the Sentinel and others?!

It’s no surprise really though, the Sentinel never really covered the opposition to the soccer stadium coming from Parramore and community groups either. They didn’t send reporters to the NAACP town hall meeting in Parramore before the Venues vote. They didn’t report on the Fight Back Coalition town hall meetings, Community Fish Fry or protests. And they didn’t cover the National Action Network efforts on the issue. But unlike the Sentinel, every other major news outlet in town covered the community level opposition coming from Parramore, with WFTV, Brighthouse News 13, My Fox Orlando and West Orlando News providing regular ongoing coverage of the opposition. Even ESPN covered our gentrification concerns at the national level!

At least Maxwell is getting it right now. Now that the Interlocal Venues Agreement has passed and everything is pretty much a done deal, of course. Late is better than never.

But when the stakes are so high for Orlando’s poor and most vulnerable, our community really demands more from the only daily print publication in town.