Orlando State Representative Anna Eskamani was unanimously elected by her colleagues to serve as Chair for the Orange County Legislative Delegation, alongside Senator Geraldine Thompson as Vice Chair and Representative Johanna López as Secretary. 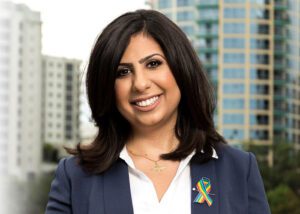 The Orlando Democrat is the youngest woman to serve as Chair of the delegation, and this is the first time the entire local delegation leadership team members are women and people of color.

“It’s incredibly humbling to serve in this leadership role,” Rep. Eskamani said. “As someone who was born and raised in Orlando and grew up in a family of working class immigrants, I never imagined I would ever serve in public office let alone help lead the Orange County Legislative Delegation into the future.”

Rep. Eskamani said delegation leaders are focused on solving problems versus creating problems as the key to Central Florida’s success. But in a Florida legislature dominated by Republicans and Governor Ron DeSantis looking to flex his political muscle, the Orange County delegation has a tough challenge ahead.

“Orange County is home to 1.423 million people and one of the largest school districts in the country,” Rep. Eskamani said. “We’re known for our major tourist attractions, nationally ranked universities and colleges and beautiful trails and parks. We’re a diverse county with one of the fastest growing populations. With that comes important challenges for us to overcome, like housing affordability, economic disparities, health equity, public transportation, workforce shortages, and public safety.”