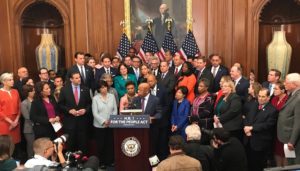 U.S. Congressman Darren Soto issued the following statement following the introduction of H.R.1, For The People Act, a House Democrats reform package aimed to protect the integrity of our nation’s democracy, end the culture of corruption in Washington, and reduce the role of money in our politics:

“This landmark, comprehensive democracy reform package is all about returning the power back to the American voters and restoring faith in our government. We’ve witnessed growing dissatisfaction and public outcry on our country’s political system. The American people have spoken. And House Democrats are responding with action by focusing our efforts on this aggressive pro-democracy legislation…


“First, the For The People Act strengthens Americans’ right to vote by improving access to modern and secure voting measures, while also promoting integrity in our democratic institutions. Additionally, the legislation stops voter purging and reaffirms Congress’ commitment to restore the Voting Rights Act. Democrats are committed to making it easier, not harder, to vote.

“Second, it ends the dominance of money in our politics by tackling key campaign finance rules and strengthening oversight. At its core, it guarantees disclosure of donors and tightens Congress’ authority to regulate money in politics. It takes away the influence big-donors and powerful corporations have on campaigns and shifts that power to constituents and community groups.

“Lastly, H.R.1 ensures public officials work for the public interest by fortifying ethics laws and imposing greater enforcement to combat corruption. Our forefathers pledged their lives, their freedom and their fortune so that America would be a democracy. I proudly join my House Democratic colleagues as an original co-sponsor of For The People Act, to restore a government for the people, by the people and of the people as President Lincoln christened for all Americans.”

During today’s press conference introducing H.R. 1, U.S. Congressman John Lewis stated:  “Our vote is the most powerful, nonviolent, instrument of transformation we have in our democracy… I truly believe deep in my heart and my soul, the way votes were not counted in Georgia and Florida and other states, changed the outcome of the last elections. That must never happen again in our country!”