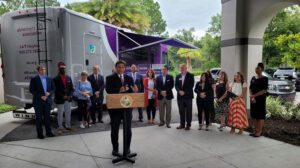 Governor Ron DeSantis highlighted record funding for Alzheimer’s and related dementias and signed Senate Bill 806, to establish the Ramping up Education of Alzheimer’s Disease and Dementia for You (READY) Act. Additionally, the Governor announced that the final pillar of the five-part Dementia Action Plan, created in 2019, has been fulfilled with the establishment of the Florida Alzheimer’s Center for Excellence.

The Freedom First Budget signed this month by the Governor included record funding for Alzheimer’s and dementia care, marking a nearly 60% increase in funding since the Governor took office in 2019.

“From day one, Governor DeSantis has been dedicated to ensuring Florida is a place where citizens can live well and age well. This record funding and the establishment of the Florida Alzheimer’s Center of Excellence (FACE) show the administration’s continued support for investing in a better tomorrow for all Floridians,” said Department of Elder Affairs Secretary Michelle Branham. “I am especially grateful for the positive impact FACE will have on seniors and their families with early detection, early diagnosis, critical care planning, support, and resources.”

Further, Florida has established the Florida Alzheimer’s Center of Excellence (FACE) under the leadership of Governor DeSantis. This program focuses on enhancing the infrastructure available to support impacted seniors, families and caregivers. FACE includes innovative partnerships like the one between INSIGHTEC and a consortium of Florida universities that identify patients for the Blood Brain Barrier clinical trials for more effective treatment of Alzheimer’s.


“We are going to bring more hope to this generation. There has not been a lot of success in this area before,” said Shane Strum, President/CEO, Broward Health. “We are going to explore new boundaries and medical innovation and create new best practices in the care for Alzheimer’s patients. This is only possible due to the tremendous leadership of the Governor and the other state leaders here who saw the need in our state and sought after a solution.”

“The urgency to meaningfully accelerate the pace of medical innovation in this area is clear,” said Maurice R. Ferre M.D., CEO and Chairman, INSIGHTEC. “Improving the lives of patient’s is core to our mission. I am confident that together, we will meaningfully advance the landscape for patients both now and into the future.”

“I want to thank Governor DeSantis and Secretary Branham for their continued support for those living with Alzheimer’s and other memory disorders,” said Tanya Miller, Volunteer/Caregiver, Alzheimer’s Association. “My loved ones cannot speak for themselves or perform activities of daily living on their own. They need someone by their sides at all times. Funding Alzheimer’s research provides the opportunity to improve treatments, plans and quality of life and one day, a cure. I am thankful to live in a state that is working to lead the nation for Alzheimer’s care and research.”

Eating Better (on a Budget)