Earlier this month in a packed room of Orange County Democrats and candidates running for office, Rep. Scott Randolph laid out more details of the Orange County Democratic Executive Committee’s absentee ballot plan for November’s elections. A major component of the campaign is an effort to sign up more Democrats to receive absentee ballots and Randolph developed an entire mailer/walk piece with the request form. With the news also came the first major blunder of the campaign locally.

Randolph said at the local party meeting that he printed 15,000 pieces of literature and urged candidates to deliver them door-to-door. That would make it one of the largest expenses for the local party this election cycle. But look close enough and you’ll see a major mess-up that could confuse voters. On the actual request form, it states: “Current Sarasota County Residence Address.”

Democratic voters already do not typically vote absentee. Randolph’s wife, Susannah Randolph, now acting as Campaign Chair for the local party under her husband, also managed Alan Grayson’s 2010 Congressional Campaign which saw a disaster occur with their attempt to get Democratic voters to vote by mail. Grayson lost big in 2010 despite a big uptick in Democratic absentee requests.

Randolph, who decided not to seek re-election this year to the Florida House, is actively campaigning for state party chair. Last week, Randolph was forced to send out an “Important Message from the Chair” admitting that the literature he ordered and printed with party money contains the wrong information on the form. Leadership of the local party suggests simply “crossing out Sarasota” and then it is fine to use. 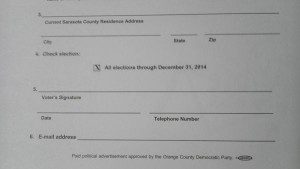 The local Democratic Party plan also includes “robo calls” or automated messages to supplement the walk card/mail piece. The entire message on the Democratic Party material does not educate voters at all, but rather could be seen as a turnout suppressant, reading:

“Many polling places have changed. Don’t wonder where to go, or wait in even longer lines when you get there!”

The piece also depicts a line of people standing behind one another. No other voter education or information is provided and the Democratic Party is only visible in small print on the return address and required “Paid for by” language. 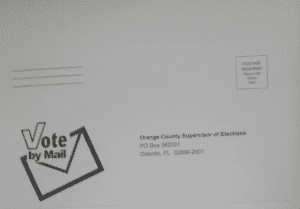 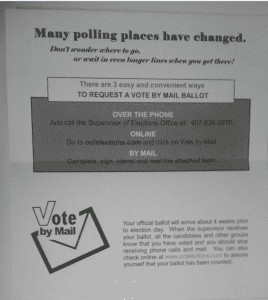 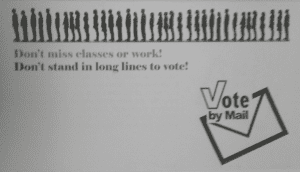 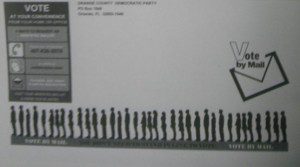