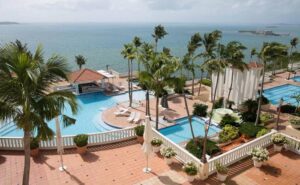 Puerto Rico tourism continues to register remarkable results, with the accommodations industry generating $1 billion during the first seven months of 2022.

The industry achieved this milestone three months earlier than in 2021, a year that ended with about $1.3 billion in accommodations revenue.


“We have hit that mark for only the second time in history, and we’ve done it three months earlier than last year,” said Alisha Valentine, Director of Research and Analytics at Discover Puerto Rico. “Despite the industry concerns, we’ve seen increased demand for lodging over last year’s record-setting pace. Through the end of July, total lodging demand is 18% higher than a year ago, with hotels booking 17% more business and rentals 20% more.”

Brad Dean, Chief Executive Officer of Discover Puerto Rico, said the development is especially remarkable since the tourism industry confronted a volatile economic scenario, not only in Puerto Rico, but in international markets, due to concerns associated with inflation, air transport, high fuel prices, and the economy.

Accommodations reservations for the remaining two quarters of 2022 are projected to be above pre-pandemic levels. The outlook for the fourth quarter is promising according to officials, with hotel bookings six percent higher than in 2021, and a 12 percent bump reported in short-term rentals.

Since the beginning of the year, Puerto Rico has broken its record of jobs in the leisure and hospitality sectors every month, signaling a robust reboot of the economic engine.

Starting in January 2022, each month has seen a figure that surpasses the previous record to reach 86,700 workers in June of this year, according to the U.S. Bureau of Labor Statistics.

However, officials note that many businesses are still understaffed and are eagerly seeking to hire more people.