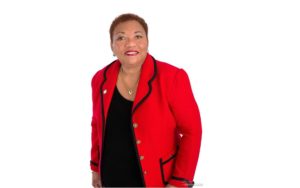 Few Orange County residents have been as politically and professionally successful as State Senator Geraldine Thompson.  After working for what is now Valencia College for 24 years, she was elected to the Florida House of Representatives in 2006.  She was elected again in 2008 and 2010.  In 2012, she ran for and won a seat in the Florida Senate, the first African-American woman to do so.

Thompson is a current candidate for U.S. Congress in Florida’s new 10th district, which encompasses her current state senate district in its entirety.  Thompson says that she has been “endorsed, time and time again, by the voters,” given her phenomenally successful political career.  The voters in her district are not the only ones who have supported her.

She is married to Senior Judge Emerson Thompson.  The couple has three adult children.  Judge Thompson retired from the 5th District Court of Appeals located in Daytona Beach.  He now fills in when other judges need him to cover short-term vacancies or to hear cases when other judges are unavailable to do so.

Geraldine Thompson lists several of the top priorities for her campaign for Congress: education, full employment and the environment.  She wants to make community college “free, and use tax dollars to help reduce the number of students who are graduating burdened with debt,” a plan famously promoted by presidential candidate Bernie Sanders.  Thompson talks about the importance of “full employment,” and promotes the importance of jobs that “rebuild our infrastructure, specifically our ports, tunnels, and bridges,” because, in part, those jobs cannot be outsourced.  Thompson has spent much of her life in Central Florida, an area dominated by the service industry, and she notes the importance of jobs that cannot be exported like those which put people to work in construction and infrastructure.

Thompson also promotes the importance of protecting our land, air and water, noting that clean energy holds much promise, both in job creation as well as energy stability.  She wants to help re-train employees of the fossil fuel industry, and focus on “geothermal, biofuels, solar, and all sustainable forms of energy” to meet multiple goals at the same time.  She also believes it is important to raise the minimum wage to $15 an hour, and notes that she co-sponsored a bill to that effect in the Florida Senate.  She notes that many residents of her district “work two or more jobs but still get government assistance” because of the lack of available full-time work and the relatively low wages available to potential employees in Central Florida.

Senator Thompson has a long history with education and schools, not only because of her work for 24 years at Valencia College.  Thompson has won state and national recognition for her work on behalf of others.  The Florida Education Association has honored her with a state-wide Human & Civil Rights Award and a Friend of Public Education Award.  The National Education Association likewise honored her with the prestigious Mary Hatwood Futrell Award which recognizes leadership and significant progress in promoting women’s rights and equal rights for all.  Geraldine Thompson helped establish the Wells’ Built Museum of African American History & Culture, and has written a book about African-American history that is part of the Black America Series, published by Arcadia Publishing.

Geraldine Thompson has been a tried and true advocate for progress in Central Florida, as well as across Florida and the nation.