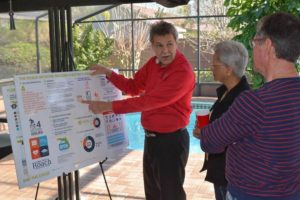 Rick Roach has been running for Florida Senate in District 13 for two years.  His campaign builds on his combined 16 years on the Orange County School Board and his 13 years as an employee of OCPS as a guidance counselor, coach and teacher.  He also has worked 20 years as a teacher trainer, training over 19,000 teachers in graduate level courses as he also represented much of Orlando on the School Board.

During the time he was on the school board, he made national news when he took the 10th grade FCAT, the state’s mandatory standardized test at the time. During his four terms as a school board member, he was an engaged, articulate, and sometimes outspoken advocate for students, advocacy that he has amplified and focused during his senate run.  Roach is unabashedly against mandatory, high-stakes, standardized tests, and his long list of political endorsements mirror that opposition.  Roach has garnered endorsements from the Orange County Classroom Teachers Association and Orange Education Support Professionals Association, the unions representing employees in OCPS, the Brevard Federation of Teachers, historian and former U.S. Assistant Secretary of Education Diane Ravitch, as well as the Network for Public Education and a slew of additional individual and organizational endorsements.

Roach says his campaign has been focused on “taking the high road,” especially when it comes to the political stalemate and gridlock that exists so frequently in Tallahassee.  Roach notes that he will “sit down and have a cup of coffee or a beer with just about anyone” who is interested in improving the plight of Florida’s students, teachers, school employees, and taxpayers.  His interests do not stop with schools, however, drawing parallels between the quality of schools and the quality of jobs that quality schools attract. Roach has promoted the relationship between high-quality schools and high-quality employees for companies across his district, which encompasses nearly all of Orange County east of I-4 and north of the Beachline Expressway.  He says that business groups are “quick to get it,” that the better job we do in educating students, the better Florida’s companies will be able to compete in a broader market and interconnected economy.

Roach has also focused on safety and crime, as well as healthcare in his campaign.  He wants to close the insurance coverage gap by accepting the offer of federal dollars that have been left on the table, so far.  He is quick to note the importance of job training in reducing recidivism among individuals convicted of crimes, noting that individuals leaving jail or prison often have limited job opportunities because of the lack of training and other job-related assets.  He promotes the notion that job training should be a mandatory part of jail sentences, training that he says should start 12 to 18 months before a prisoner is released, so that they have options upon release. He refers to the improvement in schools and job training as a potential “goldmine in order to bring jobs into the state.”

Roach was inspired to run for office when he says he was tired of seeing that too many public policy leaders and school bosses are fixated and obsessed with test performance.  Relying on his experience as a former guidance counselor at Boone High School, Roach promotes the notion that graphic arts, accounting, and other life and job skills should be far more important than a myopic focus on test scores.  Roach resists the trend in the state to reduce the share of dollars available for education, noting that better job training will promote a “diverse economy and keep Florida from continuing to lose billions of dollars because Florida’s schools are not what they should be.”

“We could do so much more to close the talent gap, especially with secondary schools,” he notes hopefully.