In a letter to President Biden and HHS Secretary Xavier Beccera, U.S. Representative Abigail Spanberger urged the government to declare a Pediatric Health Emergency to initiate a national response to surging numbers of respiratory syncytial virus (RSV), flu, and mental health patients in hospitals across the country. 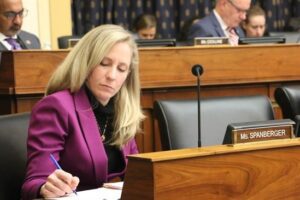 Rep. Spanberger and 10 of her colleagues wrote that the Pediatric Health Emergency declaration was needed to provide assistance to pediatric healthcare providers as hospitals become overwhelmed by high numbers of pediatric RSV, flu, and mental health patients. Additionally, the lawmakers underlined the scope of the issue facing hospitals, providers, and patients across the United States.

“Pediatric hospitals across the country are seeing a spike in RSV and influenza cases. As we know from the COVID-19 pandemic, contagious respiratory illnesses can quickly overwhelm hospitals and staff, resulting in shortages in workforce and other resources,” wrote the group of lawmakers. “Beyond RSV and influenza, pediatric beds are also being used for an increasing number of pediatric mental health patients who have nowhere else to go.”

According to the Centers for Disease Control and Prevention (CDC), the rate of hospitalization for the flu and flu-like illnesses is the highest since 2010-2011.

The lawmakers continued, “Your continued support for health care providers during the COVID-19 pandemic has helped limit the effect of the virus throughout the country. We hope that you will take similar prompt and preemptive action to aid pediatric hospitals to protect the health and well-being of our nation’s youth and the doctors and practitioners who oversee their care.”

Rep. Spanberger was recently picked for House Democrats’ battleground leadership representative, which gives voice to members in competitive districts. She is a former CIA officer who flipped a Republican Virginia seat, and she recently won a major re-election where she was targeted.

Here is the full letter calling for a Pediatric Health Emergency declaration: