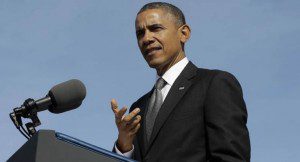 Ronald Reagan is the best president since WWII, 35 percent of voters say, with 18 percent for Bill Clinton, 15 percent for John F. Kennedy and 8 percent for Obama, the independent Quinnipiac University finds.

Obama has been a better president than George W. Bush, 39 percent of voters say, while 40 percent say he is worse. Not surprisingly, Republicans say, 79-7 Obama is worse and independent voters say, 41-31 percent. Democrats say, 78-4 percent that he is better.

Obama narrowly outperforms Bush, 37-34 percent when it comes to managing the economy. And 45 percent of voters say, America would be better off if Republican Mitt Romney had won the 2012 presidential election. 38 percent say the country would be worse off.

“Over the span of 69 years of American history and 12 presidencies, President Barack Obama finds himself with President George W. Bush at the bottom of the popularity barrel,” said Tim Malloy, assistant director of the Quinnipiac University Poll. “Would Mitt have been a better fit? More voters in hindsight say yes.”

Voters say, the economy and jobs are the most important issues facing the country today.  And Obama gets negative grades for his handling of most key issues – the economy, foreign policy, health care, the environment and terrorism.