This morning, Congressman Maxwell Alejandro Frost was officially sworn in as a Member of the United States House of Representatives, representing Florida’s 10th Congressional District. Orlando’s new Congressman had to wait until the Republicans finally selected the Speaker of the House. 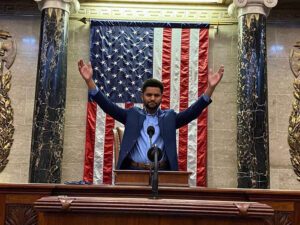 “I’ve been organizing for a decade, since I was 15 years old. It is the honor of my lifetime to officially be sworn in as a United States Congressman representing my hometown of Central Florida,” Congressman Frost said in a statement. “The people of Orlando sent me to Washington D.C. to fight for them and enact the kind of change they want to see in our communities. Gun reform, universal healthcare, housing affordability, tackling the climate crisis, and more.”

Rep. Frost replaced Democratic Congresswoman Val Demings, who ran for U.S. Senate and lost to Senator Marco Rubio instead of seeking re-election to the U.S. House. Rep. Frost is the youngest member of Congress and he is the first member of Gen Z to serve.

“We have so much work to do, but I’m honored to represent my people,” Congressman Frost added.

In a Republican-led House under Speaker Kevin McCarthy, some of the Orlando Congressman’s goals may be difficult to achieve, but Central Florida voters can expect Rep. Frost, a Democrat, to be a vocal advocate for liberal and progressive issues in Congress.