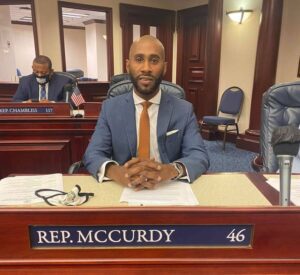 “Research has shown that the militarization of local law enforcement through military grade weapons, armored vehicles, combat attire, and other items provided by the Department of Defense does not reduce crime,” Representative Travaris McCurdy said. “There is no need for law enforcement agencies to be outfitted like combat soldiers while they are tasked with protecting and serving our community. The most important thing for policy makers and the public to know is that you can’t justify giving surplus military equipment to police departments on the grounds it will lead to a reduction in crime. There is no evidence for that.”


The legislation makes reference to the use of force against protesters. “A law enforcement agency may not use kinetic impact munitions or tear gas on an assembly or protest unless the assembly or protest has been declared to be unlawful or a declared state of emergency exists concerning such protest or assembly. As used in this subsection, the term ‘kinetic impact munitions’ includes impact rounds and baton rounds, such as rubber batons, bean bag rounds, foam baton rounds, and plastic, wax, wood, or rubber-coated projectiles.”

The bill would also prohibit local police from acquiring weaponized unmanned aerial vehicles and armored multi-wheeled vehicles that are mine-resistant, ambush-protected, and configured for combat from a surplus program operated by the federal government.

“Having been a community organizer for over 10 years, I have organized and led protests fighting for underserved and underrepresented communities,” Representative Angie Nixon said. “I am excited to join Representative McCurdy in filing this legislation which will aid in the safety of countless residents and organizations that peacefully protest while exerting their first amendment rights.”

The legislation would not apply to the Florida National Guard or Florida State Defense Force, and any local law enforcement agency would need permission of the executive director of the Department of Law Enforcement for any exception.