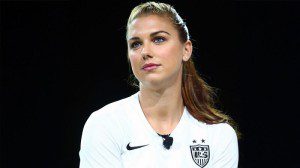 Orlando Pride soccer star Alex Morgan is joining four other players in an action filed with the Equal Employment Opportunity Commission against the U.S. Soccer Federation. The five players, all from the World Cup-winning U.S. national team, are accusing the USSF of wage discrimination.

Alex Morgan, Carli Lloyd, Megan Rapinoe, Becky Sauerbrunn and Hope Solo claim in the EEOC filing they were paid nearly four times less than their male counterparts on the U.S. men’s national team. “The numbers speak for themselves,” Solo said in a statement according to the AP. “We are the best in the world, have three World Cup Championships, four Olympic Championships, and the USMNT get paid more just to show up than we get paid to win major championships.”

According to the players’ complaint, top players on the women’s team are paid about $72,000 a year by U.S. Soccer to play in a minimum of 20 exhibitions per year, which is a salary far less than the men. The complaint also alleges that unlike the men, the women players are only awarded bonuses if they win their matches. The players filing action also say that the women are paid $30,000 each for making the World Cup team, while the men are paid $68,750.

“It’s the right step for us in moving forward with this team,” Morgan said of the action against U.S. Soccer.