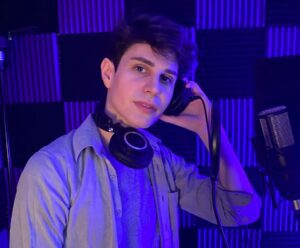 Valentine’s Day can be a hard time for many people, stirring up emotions of unfulfilled love. From the heart of Florida comes a lovelorn song that is sure to stir up a different kind of emotion on Valentine’s Day. Released worldwide on February 7th, “Borrowed Time” from Florida’s new indie artist Kristopher Houck shines a personal and empathic light on the pain and conflict that a broken love can evoke.

As the music industry strives to adapt to a new virtual world of COVID-19, Kristopher Houck is reaching an international audience with songs written to help people feel and to heal. With a degree in psychology from the University of Central Florida and over a decade of musical theater and orchestral experience as a performer and multi-instrumentalist, Kristopher is devoting his songwriting to the cathartic influence of music that was so important to his own struggle for identity and love as a gay youth growing up in Clermont and Orlando.


“I want people to open up to their emotions,” Kristopher explains. “Borrowed Time is about settling for less love than you deserve because it’s better than no love at all.”

Following his debut single “Liar” that received critical acclaim and drew an international fan base in over 100 countries, “Borrowed Time” is Kristopher’s second release of 2021, a cinematic song dealing with the emotional  struggle of a fabricated love. Embracing a fairytale-esque musical theme, this emotive song is already capturing the attention and praise of independent music curators worldwide in pre-release reviews.

“His voice is a piece of art,” remarked indie music blog Independent Spirits in their song review.

“The words are powerful and the lyrics touching,” said the Indie Music Center in their release review. “The emotions  will invade you in a rather surprising way.”