CAR T-cell therapy is an immunotherapy that works by harnessing the power of a patient’s immune system to attack tumors. Treatment begins with the collection of the patient’s T-cells, which help protect the body from infection. The T-cells are then sent to a laboratory, where they are genetically re-engineered to produce proteins on their surface called chimeric antigen receptors. The new T-cells are reproduced by the millions in preparation for infusion back into the patient.

Once infused into the patient, the T-cells continue to multiply and are guided by their new receptors to attack and kill cancer cells. 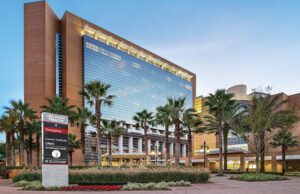 “Cancer treatment has changed dramatically, and CAR T-cell therapy is one of the transformative, new options we have to help patients with advanced forms of leukemia and lymphoma,” said Yasser Khaled, MD, medical director of the Orlando Health Cancer Institute Bone Marrow Transplant & Cellular Therapy program. “This and other immunotherapies we’re using here at Orlando Health are allowing us to usher an exciting, new era of cancer treatment featuring medicines that are customized to each patient.”

CAR T-cell therapy was approved by the US Food and Drug Administration in 2017. Six therapies have been developed since then and approved for treatment of blood cancers, including lymphomas, some forms of leukemia, and, most recently, multiple myeloma.

Orlando Health, headquartered in Orlando, Florida, is a not-for-profit healthcare organization with $8.1 billion of assets under management that serves the southeastern United States.


The local healthcare system provides Central Florida’s only pediatric and adult Level I Trauma program as well as the only state-accredited Level II Adult Trauma Center in Pinellas County. According to the hospital, it is the home of the nation’s largest neonatal intensive care unit under one roof, the only system in the southeast to offer open fetal surgery to repair the most severe forms of spina bifida, the site of an Olympic athlete training facility and operator of one of the largest and highest performing clinically integrated networks in the region. Orlando Health has pioneered life-changing medical research and its Graduate Medical Education program hosts more than 350 residents and fellows.

The 3,238-bed system includes 23 hospitals and emergency departments – 18 of which are currently operational with five coming soon. The system also includes nine specialty institutes, more than 100 adult and pediatric primary care practices, skilled nursing facilities, an in-patient behavioral health facility under the management of Acadia Healthcare, and more than 60 outpatient facilities that include imaging and laboratory services, wound care centers, home healthcare services in partnership with LHC Group, and urgent care centers in partnership with FastMed Urgent Care. More than 4,000 physicians, representing more than 100 medical specialties and subspecialties have privileges across the Orlando Health system, which employs more than 25,000 team members and more than 1,200 physicians.